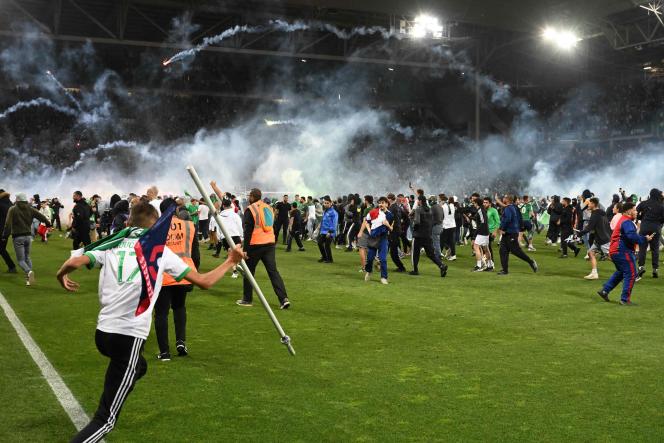 AS Saint-Etienne (ASSE) was sanctioned with six penalty points, three of which were suspended, after the serious incidents that occurred during the club’s relegation to Ligue 2 (L2), the Football League announced on Thursday June 23. professional. According to the scale in force, the applicable sanctions could go as far as disqualification and even demotion.

In a press release, the Saint-Etienne club said it would “not appeal the decision”.

After having already inflicted withdrawals of points, admittedly more limited, in Nice or Lyon, the disciplinary committee this time struck hard against ASSE following the scenes of chaos at the Geoffroy-Guichard stadium at the end of May. , during the barrage lost on penalties against Auxerre: invasion of the lawn by angry Greens supporters, then throwing smoke bombs in the direction of the stands and general jostling.

In addition to this withdrawal of points which risks complicating the objective of an immediate recovery in Ligue 1 (L1), the club is also sanctioned by holding six matches behind closed doors, two of which are suspended, which will penalize the club’s finances, already very fragile, by depriving it of a ticket office. ASSE will therefore play at home without an audience on the weekend of August 6 against Nîmes, during the 2nd day of L2. And the Saint-Etienne team will remain all season under the threat of an additional withdrawal of three points in the event of new overflows from its supporters.

The past months have shown that the Disciplinary Committee, chaired by Sébastien Deneux, no longer hesitates to pronounce very heavy sanctions in the event of serious incidents, such as the withdrawal of points in the classification. The one inflicted on AS Saint-Etienne could strain their season, while only the first two of L2 will go up to L1 in May 2023, a handicap perhaps prohibitive for the ambitions of the Saint-Etienne club… but also for the interest lent to American businessman David Blitzer, candidate according to L’Equipe for the takeover of the Greens.