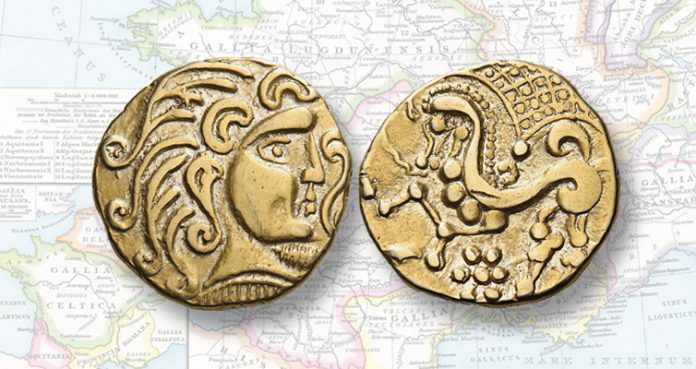 In the second century B.C., a Celtic gold stater was issued by the Parisii tribe of northeast Gaul. It is 7.21 grams in weight, slightly less than one-quarter ounce, and 20.5 millimeters wide. It is slightly smaller (but more heavy) than a Jefferson 5-cent coins.

According to the firm, the Parisii’s gold staters are among the most elegantly Celtic of all Celtic coins in Europe.

The reverse depicts a Celticized head with long, wavy hair of Apollo. His head is surrounded by curving ornaments, which are vaguely similar to the dolphins seen on the coins from Syracuse.

The reverse depicts a Celtic horse with prominent mane and a large head. Above, a large sail with a checkerboard design and each square filled with a small pellet is shown.

Both sides were derived from the Philip II gold staters, but the Celtic artists who created these coins created a new type.

Standard types of Messana’s coinage show a biga (or mule) in honor of Anaxilas’ Olympic victory in the mule car races.

The firm stated that a rabbit and a fly appear on the reverse. This “once more testifies to the care with which Greek artists observed nature around them,”

The silver coin was graded Extremely Good, with the exception of die rust on the reverse and a small die break.