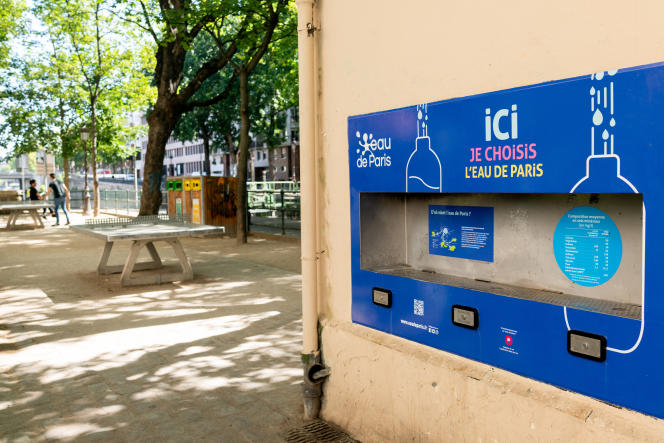 The heat is increasing, Monday, July 18, at the height of the heatwave episode which is hitting France: the map of France has turned crimson over a large part of the Atlantic coast, with 15 departments on red alert for a heat wave and temperature records expected in Brittany.

Fifty-one departments are also in orange vigilance (meaning “be very vigilant”) and the rest of France – with the exception of Corse-du-Sud – is classified yellow (“be attentive”).

No one is safe anymore: the peak of this 45th heat wave recorded in France since 1947 is expected on the western facade, from Landes and Gers to Finistère. In Brittany, current temperature records “will fall across the region,” said Météo-France.

Météo-France expects many new records, such as in Brest where the highest temperature, recorded in July 1949, was exceeded, with 35.8°C at midday. Forecasting engineer Gaétan Heymes warns on Twitter that “40°C is possible until the end of Finistère today [Monday]”.

Monday could be one of the hottest ever recorded across France. Maximum temperatures will be above 30°C everywhere and between 38 and 40°C in half of the country, from the west to the Rhône Valley. The period from June 1 to July 15, a little over the first third of summer, was the hottest ever observed since statistics began in 1947 in Corsica and in the Provence-Alpes-Côte d’Azur region, according to Meteo-France.

One of the effects of the intense heat is the multiplication of forest fires. Sunday evening, the fires in Gironde regained ground thanks to swirling winds. They devoured 14,000 hectares of vegetation, the prefecture said Monday morning. It had led to new evacuations in the Landiras sector on Sunday.

Some 8,000 people were in the process of “preventive evacuation” on Monday afternoon in the two districts of La Teste-de-Buch, in the Arcachon basin, the prefecture announced, specifying that “the fire [came ] to skip runway 214,” south of this town of some 26,000 people. “La Teste is not threatened by the flames. On the other hand, the wind is turning, the neighborhoods are really in the process of finding themselves under smoke, “explained to Agence France-Presse Lieutenant-Colonel Arnaud Mendousse, of the Departmental Fire and Rescue Service. (SDIS) 33. “The fumes are toxic, it’s a matter of public health to protect the population,” said the spokesperson for the fire department.

In La Teste-de-Buch, “the fire arrived at the sea” and was heading south, the prefecture said on Sunday evening. On amateur videos, you could see the huge blaze devouring the beach of the Lagoon, south of the Dune du Pilat. The Ministry of the Interior announced reinforcements with, as of Sunday evening, “three additional planes” to support the six bombers already engaged, as well as “200 additional firefighters (…) with 11 heavy trucks”.

In the middle of the harvest, crop fires broke out as far as northern France, where they affected several hectares in the Nord and Pas-de-Calais.

This scorching wave will flow back very quickly on the west facade, pushed east by sustained winds. Heatwave red vigilance should be lifted from 6 a.m. on Tuesday. On Wednesday, “the high temperatures will only concern the south-eastern quarter with nights still very hot”, according to Météo-France.

This heat wave affects all of Western Europe, also causing forest fires in Spain or Portugal. On Monday, almost all of Spain remained on “extreme risk” fire alert, the highest level. The country, which has been suffocating since July 10 with highs well above 40°C and falling little at night, should experience a very short respite at the start of the week. “Climate change kills people (…) but also our ecosystem, our biodiversity”, reacted the president of the Spanish government, Pedro Sanchez, on Monday.

In the UK, the National Weather Agency has issued the country’s first-ever ‘extreme heat red’ alert for a national emergency, warning of the risks the heat poses even to people young and/or healthy. “Hotter than the Sahara,” headlines the tabloid The Sun on Monday. The UK forecaster’s ‘extreme heat’ red alert is ‘at risk to life’.

The hottest temperatures are expected for Tuesday and could exceed the 40°C threshold, a first in the country. The British record dates back to July 25, 2019, with 38.7°C recorded in Cambridge, in the east of England. Schools in some counties will remain closed, while major transportation disruptions are expected. Several railway companies have called on the population not to travel on Monday and Tuesday, as the British rail network is not designed for such heat.

The government was accused on Sunday of neglecting the situation, after resigning Prime Minister Boris Johnson missed a crisis meeting on the subject in Downing Street.

News Editor - July 18, 2022 0
The heat is increasing, Monday, July 18, at the height of the heatwave episode which is hitting France: the map of France has turned...