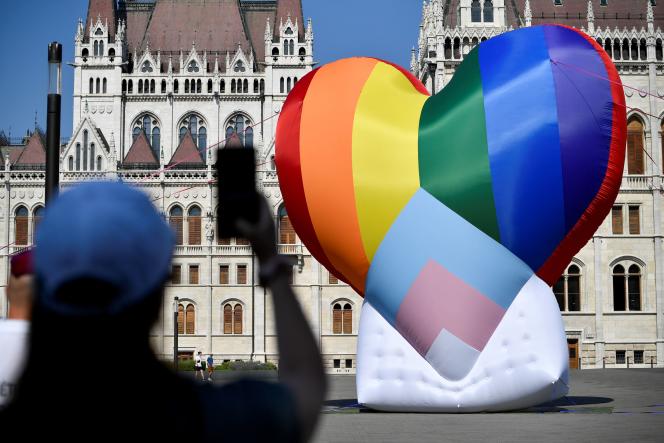 The European Commission has taken Hungary to the Court of Justice of the European Union (CJEU), the EU’s highest court, over a law that violates LGBTQ (lesbian, gay, bisexual, trans and queer) rights and its refusal to renew the license of Klubradio, a radio station critical of the government.

“The Commission considers that the law infringes the rules of the internal market, the fundamental rights of people (in particular LGBT people) as well as (…) the values ​​of the EU”, underlines it in a press release. This is a new step in the infringement procedure launched against this country, which may lead to a conviction by the CJEU, or even to financial penalties.

Hungary passed a law in June 2021 prohibiting the “representation or promotion” of homosexuality and gender reassignment among minors, which had sparked outrage, including from European leaders. European Commission President Ursula von der Leyen had spoken of “shame” and the EU executive had launched the infringement procedure in July 2021.

Hungarian Prime Minister, nationalist and conservative Viktor Orban, whose country is in the crosshairs of Brussels for its attacks on the rule of law, assures that the law is not homophobic and aims to “protect children’s rights” .

The independent radio Klubradio deprived of an antenna

The European Commission is also taking the case to the CJEU against the decision of the national regulator to deprive the independent radio station Klubradio of the air, seen as a new blow to media pluralism. Klubradio, whose guests often criticize the government and which now only broadcasts online, was forced to go off the air more than a year ago. The European executive had launched an infringement procedure on this subject in June 2021.

“In the EU, the largest democratic area in the world, no free radio should be deprived of air time for non-objective reasons, on the basis of a discriminatory administrative procedure”, reacted the European Commissioner for the Internal Market, Thierry Breton. A spokesperson for Mr Orban’s government said there was no problem with media freedom in Hungary and that it was not true that the government had shut down the station.

Hungary was singled out again in the Commission’s latest report on the rule of law in the EU, presented on Wednesday. Brussels activated in April a procedure that can lead to the suspension of the payment of European funds to this country, due to concerns about the conditions for the award of public contracts, a lack of control and transparency in the use of funds, shortcomings in the fight against fraud and corruption.

The Commission’s concerns about the rule of law are also at the heart of the blocking of the Hungarian recovery plan, worth 7.2 billion euros in European subsidies.