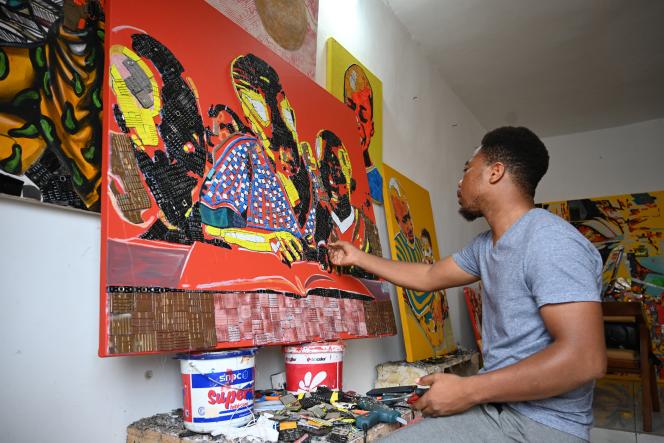 An “ecological and committed” artist, the Ivorian Désiré Mounou Koffi gives a second life to old discarded mobile phones by recycling them into colorful paints. Its goal ? Raising awareness of the fight against pollution in his works which he exhibits in Abidjan until July.

“I chose recycling because I didn’t want to limit my work to just painting. I wanted to bring something new, “he told AFP in his workshop in Bingerville, east of the Ivorian economic capital.

At 28, he defines himself as a “young contemporary artist” and claims his desire to “stand out from others”. “Since a child, I have been passionate about drawing. It was me that the teacher sent to the blackboard to do the illustration drawings for the lessons,” he recalls.

And when he tells his farming parents from a village in southwestern Côte d’Ivoire that he wants to do an art school, “they didn’t know what it was,” he says. “My art teacher came to explain to them and ask them to let me do it. »

Graduated from the School of Fine Arts in Abidjan, he began by criss-crossing the streets, the gutters, the dumps to recover keyboards and screens from old mobile phones. “Now I have a whole crew that gets paid based on how much they bring in. I told them, ‘Don’t throw it away, bring the items and we can work,'” he said.

In his workshop, he is left with large bags filled with recovered telephone components. Désiré Mounou Koffi digs through the pile of keyboards and screens to choose the elements from which he will draw colorful human silhouettes in urban settings, “pop” canvases, some of which sell for 1,500 euros.

He claims to try “to solve a problem”, in a country where selective sorting is almost non-existent and where waste ends up in the streets. “Most of my paintings speak of the daily life of man in society. However, I think that the telephone is the tool closest to us today. In our phones, there is almost everything,” he explains.

“We find everything in our garbage cans… I try to bring people to an awareness. It’s a very down-to-earth way of raising awareness, “continues the one who has already exhibited in Morocco, Belgium and France. Anxious to stick to the news, his paintings can address child soldiers, pollution, traffic jams or floods.

One of his latest series, La vie d’ici, tells the daily life of the inhabitants of Abidjan. After a first exhibition in Ivory Coast, in the coastal town of Grand-Bassam, it is exhibited until July at the Donwahi Foundation in Abidjan. He is expected in the exhibition Africa! La renaissance en marche!, as part of the “off” of the Dakar Biennale, from May 19 to 29.