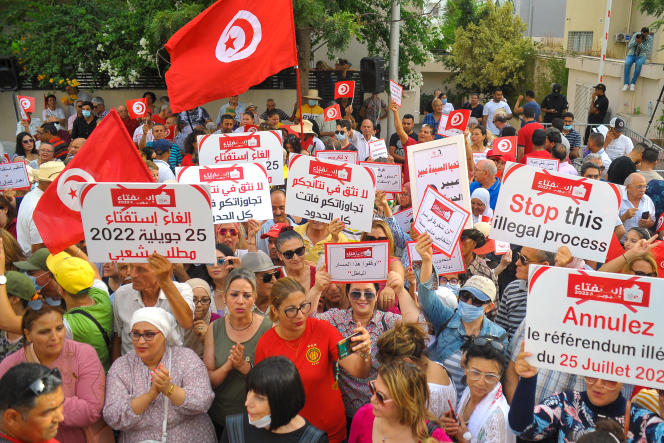 The Tunisian Islamist-inspired party Ennahda called on its supporters on Thursday, July 7, to boycott the July 25 vote on a referendum that strongly amends the Constitution, denouncing “the construction of an authoritarian regime”.

“We call for a boycott of the referendum,” which “is not in the interest of Tunisians,” movement spokesman Imed Khemeri said at a press conference in Tunis. In his eyes, the constitutional reform project “legitimizes the construction of an authoritarian and tyrannical regime”. He also denounces a “tailor-made” document, which “does not come from the people nor is it the result of a national consultation”.

President Kaïs Saïed, who has assumed full powers in Tunisia for a year, presented a draft Constitution in early July which establishes a presidential regime and grants broad powers to the Head of State, without real safeguards. The project marks a radical break with the rather parliamentary system in place since 2014, a source of recurring conflicts between the executive and legislative branches.

The draft constitution was immediately repudiated by the jurist Sadok Belaïd, who had been commissioned by the president to draft it. Mr. Belaïd dissociated himself from the version presented by Mr. Saïed, criticizing a text that could “open the way to a dictatorial regime”. On Tuesday, President Saïed, a lawyer by training, defended his amendments to the Constitution, saying they reflect “what the Tunisian people have expressed since the revolution [of 2011] until July 25, 2021, when it was back on the straight and narrow.”

A text “written by one person”

The Islamo-conservative Ennahda party retains significant electoral weight, with approximately 9% of voting intentions in the event of legislative elections. Since the fall of dictator Ben Ali in 2011 and the advent of democracy in Tunisia, the movement has governed the country virtually without interruption.

The National Salvation Front, which, apart from Ennahda, brings together small political parties and associations, had already called for a boycott of the referendum at the beginning of the week, as did some thirty NGOs, including the National Union of Tunisian Journalists ( SNJT) and the Tunisian League for Human Rights (LTDH), which denounce a text “written by a single person, without the participation of civil society or experts”.

Late Thursday afternoon, around 200 activists from Abir Moussi’s Free Destourian Party (PDL) demonstrated against the draft new Constitution, calling for “stopping the illegal referendum process”. “We don’t trust your results”, protested the militants of the PDL, a movement nostalgic for the hero of independence, Habib Bourguiba, accusing President Saïed of wanting to pave the way for a return to power of pro-Islamist parties .