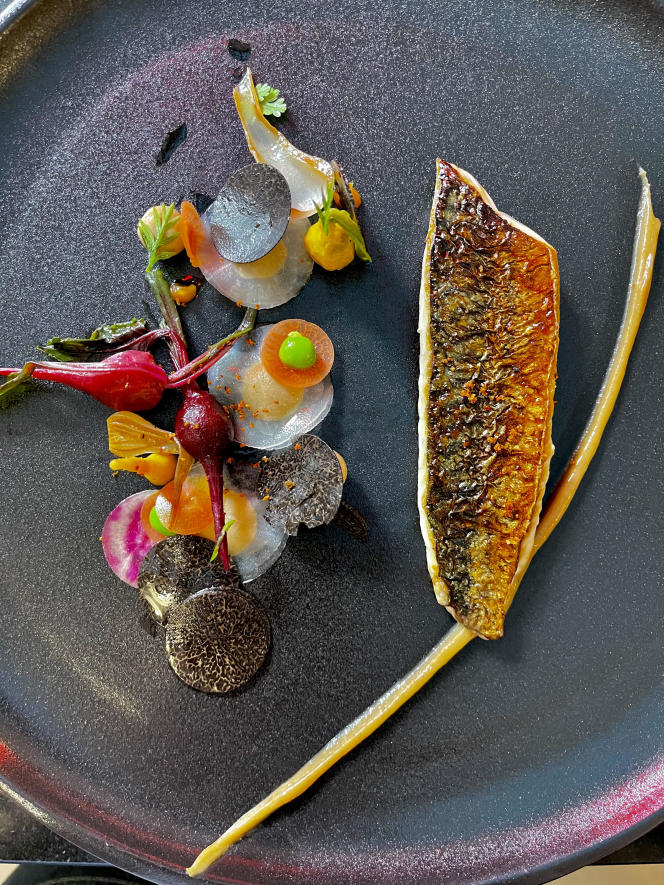 Two-starred Parisian chef for ten years, Thierry Marx is distinguished by his scientific approach to cooking. In addition to being at the head of bakery and street food brands, he has just inaugurated a brasserie in the Eiffel Tower.

“Mackerel is a childhood memory, although I can’t speak of family gastronomic heritage: my parents filled a cart once a week, it had to be practical above all. With my grandmother, who also raised me, I was an early flexitarian: she went to the market in Ménilmontant, and made a weekly plan according to what she found. We often ate mackerel because she considered it healthy. She put them to dry in the cellar with a little pepper, then smoked them with beech wood. There was always mackerel and potatoes in case of a hard blow.

When you are a chef, you first build yourself in someone else’s kitchen. I was trained at Taillevent and Robuchon, my first menus only copied what I had seen there: pigeon, lobster… noble products that symbolized French haute cuisine in my eyes. The rest was for the poor, where I came from, and I didn’t necessarily want to go back. At the end of the 1980s, when I had a star in Montlouis-sur-Loire, in Indre-et-Loire, Patrice de Nussac, the director of Gault

So I tried something else, I started mackerel. It lowered my raw material cost and forced me to remember what I had learned in Japan: cooking is about adding value to simple products. And it’s true that putting caviar on a langoustine does not give much.

What I also understood over time is that you can’t be creative without having been a bookworm. Knowing the product is not telling a story of a small producer, we all know how to do that… but knowing what the product is made of, at what temperature it will cook, when I will have a hydrolysis. In 2004, I created a research and development lab with Harvard, I replaced recipe books with test books. I took full the mouth of it until 2010, one treated me of gravedigger of the gastronomy.

What matters to me, for my flame mackerel, which I have been serving at Le Mandarin for two years, sometimes as a dish, sometimes as an appetizer, is the taste of the mackerel. I spent a lot of time getting rid of the tinsel of French cuisine, and now I know that the classic stock of fish in white wine and shallots brings too many parasitic tastes. So, for the broth, I only put the heads and bones in the oven with a little water and seaweed at 150 degrees. Then I cook the fish unilaterally on a Japanese barbecue.

Mackerel is a fatty fish, which goes well with citrus fruits. Our lab taught me that orange peels are full of essential oils with a natural gelling agent. So, rather than using the pulp, I cook the skins, I get a puree which is almost a gel, served as an accompaniment. I lacquer the skin of the fish with an old sherry sauce with a pronounced woody taste and add shiso oil (which we obtain by ultrasound) and a mixture of orange and turmeric powders that we make ourselves. And some seasonal vegetables: this morning at the market, I found the first asparagus and carrot tops. »

The dish is very pure. Mackerel in the center, a few vegetables around it, no sauce, just a dash of orange gel. Thierry Marx is true to his promise: the fish is still firm and there is no sauce to dull its intense taste. Against all expectations, the pleasure lies in the orange peel gel, which has almost a mayonnaise texture and reserves a tasty slap of bitterness with each bite. Still !