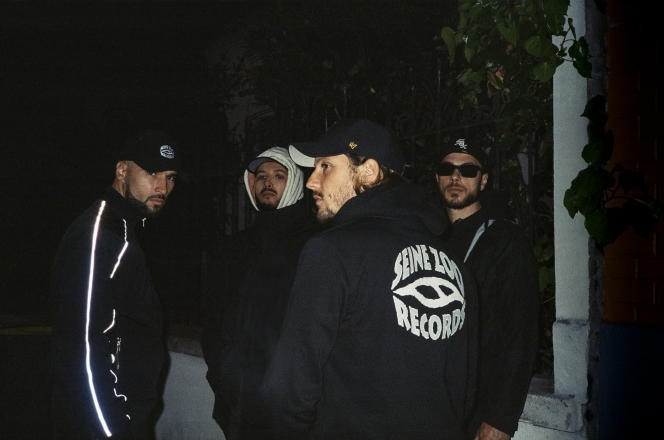 Three years that Nekfeu had not published anything since his third and last album, Les Etoiles vagabondes (2019), sold more than 800,000 copies. Six years that he had not released anything with his group S-Crew.

Since mid-May, the most popular artist in French rap and at the same time the most discreet – he no longer gives any interviews and never intervenes on social networks – had nevertheless given a small sign of life. On the Parisian ring road, large posters, without any mention, showed the logo of his label, Zoo Records, giving hope for a future project.

Solo, it seemed unlikely because as his colleague from the L’Entourage Jazzy Bazz collective confided to Le Monde in January: “Nekfeu has always said it: ‘I’d rather be with all my friends on a raft than alone on a yacht. ” So, it was accompanied by his three friends, Mekra, Framal and 2zer Washington, with whom he had formed the group S-Crew in 2001, that Nekfeu returned on Friday June 9 with SZR 2001, a record that celebrates their friendship, their conception of rap and does not hesitate to comment on the current climate in France: police violence, xenophobia…

It is therefore not surprising that the first song, Do not forget, is also a vibrant tribute to one of their own, who died on November 9, 2019 in conditions that his relatives have still not revealed. Nepal, whom they do not name in the song, as if to respect his desire for anonymity – he always rapped masked –, was a member of their collective L’Entourage but also of the 75th Session to which Lomepal belongs.

With small impressionist touches, Nekfeu, Framal or Mekra use his references to Japanese culture, the name of his 444 Nights projects or his passion for the German author Hermann Hesse. Nekfeu admits: “Since you left, I’ve been worrying, I read all the books of Hermann Hesse, the impression of better understanding your texts and your eyes frozen like those of the immortals. »

This death has visibly marked them since they return to it in the song Now to sympathize with the pain of his accomplice in the duo 2Fingz, Doums, “inconsolable”. The latter is present next to them for the chorus of Mauvais in the background. Precise in their rap, demanding in their writing, the Parisians do not forbid easy refrains: just listen to the ballad R

However, when they claim to want to make as much money as Aya Nakamura with her hit Djadja, they record the least urban pop track possible. These aren’t the most interesting bits of this comeback.

The S-Crew is much more effective and subtle when it denounces police violence in title 22: “Here, the BAC, it takes on the bad man but not only them, 22 of the dumped moms” then Nekfeu to address the authorities: “I’m talking about these blunders, because I lived it, what’s up? / Because you don’t listen to the people, I testify about them. Later, they attack xenophobic campaigns on a catchy techno refrain: “Wesh where are we? They talk like we’re not at home! »

The majority of the songs, including Ouais Boy, where Nekfeu hints at his admiration for the “yellow vests” (“You’re going to demonstrate, you come back blind / I’m like a yellow vest, I’m not lazy”), Fight Club, where the group states its profession of faith (“In the zoo, we help each other, we stay scred”), and the effective Don Zoo, where he invites the fine blade of L’Entourage, Alpha Wann, were composed by Hugz Hefner, true musical maestro of this disc.

The one who had already composed the previous hits of Nekfeu on Fire (2015), Egerie and Martin Eden, or Tricheur on Les Etoiles vagabondes, alternates totally different sound atmospheres, sometimes romantic as on Encore or absolutely explosive as on Don Zoo. What to wait before a new solo album of Nekfeu.