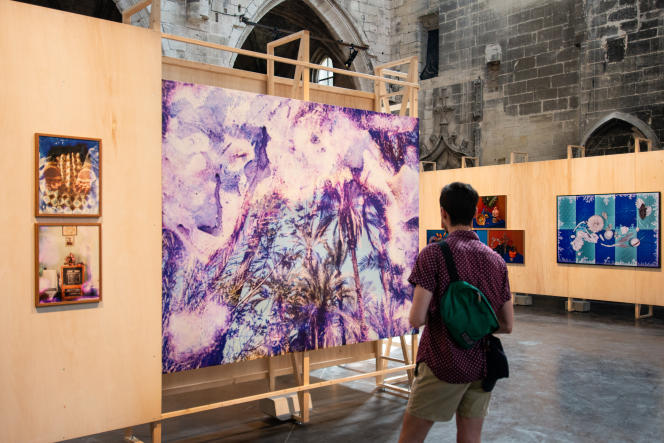 Have photographers been the forgotten ones during the Covid-19 pandemic? The reluctance of the public authorities towards them takes on a very particular reflection since the opening, Monday July 4, of the Arles Photography Meetings, which are held until September 25. It is with rare discretion that the new Minister of Culture, Rima Abdul Malak, endorsed a small part of the measures recommended (thirteen out of thirty-one) in the long-awaited report by State Councilor Laurence Franceschini on the funding for the production and distribution of photographic works, published on March 17.

Before the third Parliament of Photography, organized on June 7 and 8, at the Palais de Tokyo, in Paris, this announcement had only been posted on the Rue de Valois website. Without the slightest sleeve effect. However, the Minister undertakes, by the end of 2022, to improve respect for the copyright of photographers, to strengthen the visibility of photographic creation – especially of women -, to develop support for the various actors of this sector, to better protect the photographic heritage and to develop support for image education.

To help this sector weakened by the health crisis, these objectives are a step in the right direction, but require a strong political will not to remain wishful thinking, according to the Union of Professional Photographers (UPP) and the Society of Authors of Visual Arts and of the still image (SAIF). In most of the promised reforms, the legal framework has existed for a long time, but is simply not applied. “We need to revitalize the tools to give them their full efficiency,” concedes Ms. Franceschini.

The health crisis has acted as a catalyst for underlying trends. The increased need for visual content in the digital world is accompanied by an inclination to reduce costs and to develop a very low-cost market for image banks. According to a note from the Ministry of Culture, photographers’ turnover fell by 23% during the year 2020. In the first quarter of 2021, revenues remained 21% lower compared to the same period of 2019. Freelance photographers have paid a heavy price, with half losing 50% or more of their revenue.

This ecosystem encompasses heterogeneous professions. Published in June by the Audiovisual and Digital Communication Regulatory Authority (Arcom), a socio-economic study of the professional photography market in France lists four segments. First of all, artistic or creative photography, which is precisely exhibited on the Arles picture rails, to which are added that of illustration (image banks, microstocks and snapshots used in corporate communication, advertising, publishing or online commerce), then that of information – published in newspapers – and finally social photography (school, identity, events, such as weddings, births, etc.).

INSEE counted 22,357 companies in this sector in 2019, estimating its turnover at 1.34 billion euros. For its part, the Ministry of Culture counted, in SAIF, 22,514 photographers (fashion, press, advertising, industry and freelancers), while plastic photographers are estimated at less than 5,000. Over a long period, Arcom underlines “a phenomenon of precariousness” of photographers, whose income fell by 18% between 2001 and 2017. Moreover, three quarters of them already declared themselves worried about their future in a study, carried out in 2019, by the Center for Studies and Research on Qualifications and by the sociologist Irène Jonas. Very often, these professionals have to pursue a second job: Ms. Franceschini says that 76% of photographers live mainly from their production, but only 59% derive all of their income from it.

So how do you revitalize this sector? A third of the exceptional aid from the Ministry of Culture granted to the visual arts during the pandemic, in 2020 and 2021 (more than 9 million euros out of 27 million), was awarded to it. A misery, compared to cinema (310 million euros) or music (450 million euros). The most spectacular boost (5.5 million euros) went to the order “Radioscopy of France: views on a country crossed by the health crisis”, piloted by the National Library of France (BNF) in the straight line of the historical photographic mission of the delegation for regional planning and regional action in 1988. Reserved this time for photojournalists, it concerns 200 winners (out of 1,400 applications) each endowed with 22,000 euros. Their works will integrate the collections of the BNF and will be exhibited in 2024.

Pierre Ciot, president of the SAIF, which brings together nearly 5,000 photographers, regrets that “this windfall was not distributed differently, to reach all professionals and avoid making 1,200 dissatisfied”. He regrets that this order “also benefited photographers far removed from the press”. Among all the exceptional measures implemented during the health crisis, the National Center for Plastic Arts (CNAP) has notably reinforced its support for documentary photography, its allocations to multi-year orders and its acquisition of photos from around a hundred artists in 2020 and 2021. Here again, Matthieu Baudeau, president of the UPP, criticizes the “interpersonality” that reigns in the allocation of public aid.

“We don’t do reverse positive discrimination, penalizing well-known artists,” retorts Pascal Beausse, head of the CNAP’s photography collection, who recalls the ministry’s obligation to include first-time beneficiaries in each order and emphasizes the importance of “diversity of perspectives”. The implementation of one of the measures recommended by Ms. Franceschini forces Rue de Valois to alienate part of the press to defend creators. Improving respect for the copyright of photographers in fact involves stopping abusive recourse, in certain media, to the mention “rights reserved”. The latter prevents identification and therefore remuneration of photographers.

A code of good conduct was signed in 2014 with publishers, but the monitoring committees have gradually fallen into disuse. The ministry promises to reactivate them and take stock of them, while the UPP is asking for drastic sanctions against the culprits, with a grant of press aid reserved for media that respect this code. Similarly, the union regrets that metadata – the identity card of photographs – are too often illegally deleted by publishers when images are posted online, again depriving their authors of substantial income.

The Ministry of Culture is also committed to strengthening the presence of the French scene in France and abroad. An emergency. “The laudable goal of opening up creation internationally in institutions comes at the expense of the French scene,” Ms. Franceschini writes in her report. Marie-Anne Ferry-Fall, director general of the Society of authors in the graphic and plastic arts, also deplores “the too low percentage of diffusion of artists from the French scene in a country which invented photography”. In his eyes, “those in mid-career, in particular, suffer from not being sufficiently exposed in public institutions that seek the fresh effect of the younger generations”.

In addition, the ministry promises to reserve subsidies for women photographers to combat gender inequalities, and declares that it wants to provide more support to festivals, photography author agencies, distribution networks, such as Diagonal, or even book publishers. of pictures. In this small sector, much remains to be done, despite an emergency plan for photographic books, of 121,000 euros, adopted in 2021 and 2022. CNAP aid is very limited there – it only concerned eight books in 2020 for an amount of 50,000 euros.

Eric Cez, co-founder of Loco editions, complained bitterly, during the Parliament of Photography, of the fact that “these works are very expensive to produce and sell little”. A revealing slip, by detailing all the positions and manufacturing costs of these books, he purely and simply forgot the photographer… A step forward is nevertheless emerging: the National Book Center, which only grants aid to books containing at least 50% of text – which is rarely the case for photobooks – plans to relax these rules by the end of the year.

As for the stricter application of the exhibition right – artists must be paid when their works are exhibited in museums or photography festivals – this proposal from the Franceschini report was not adopted by Rue de Valois. “Museums pay for electricity but artists don’t always,” quipped one. However, additional funds from the public authorities have been made available to achieve this. “Things are improving, all photo festivals are now complying with it,” the ministry is assured. This is not true for museums.

Among the other subjects left aside are, according to Mr. Baudeau, the respect of deadlines for the payment of photographers by press agencies and the media, or the unwillingness to change a penalizing law for photographers: in a dispute, they are the ones who must prove that their image is indeed the original. Nothing is planned either on digital contracts and NFTs (non-fungible tokens). Nor on the non-respect of the law by photography platforms, such as the start-up Meero. There, the UPP and the SAIF clash violently on the interpretation of the code of intellectual property. And the idea of ​​creating a national center for photography, as there are in cinema or music, remains a dead letter. In other words, there is still work to do to regulate photography.