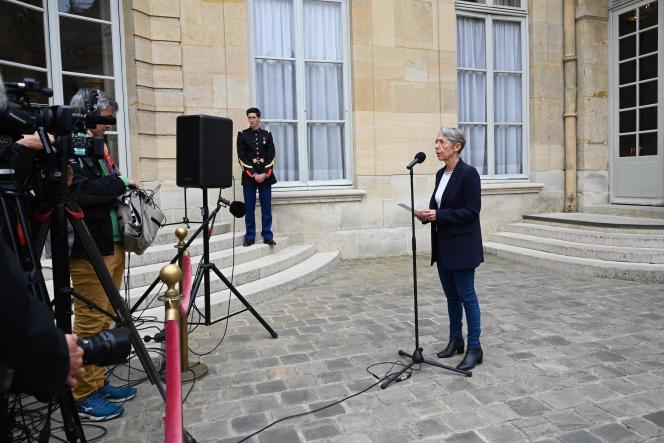 A week after the announcement of the composition of her government, Prime Minister Elisabeth Borne gathered all her ministers at Matignon on Friday May 27 to set her roadmap. At the end of the meeting, the head of government explained to the press that purchasing power, health and the climate will be the three “emergencies” that her team will have to tackle.

“The first weeks of our action must be devoted to responding to the emergencies of the French,” pleaded Ms. Borne, who assured that purchasing power was the first of her priorities. “We agreed that there should be no oversights or blind spots,” she told reporters. In addition to retirees, employees, the self-employed, public officials, I asked my ministers to pay particular attention to students. »

After the first Council of Ministers on Monday, the new government spokesperson, Olivia Grégoire, had put forward the idea on Monday of a “first bill (…) adopted by the Council of Ministers before the legislative elections” on the question of purchasing power. “It will be in this text (…) to help all French people to reduce their constrained expenses. I am thinking of energy prices (…). It will be a question of acting on the price of food with the food check, ”she said.

Olivia Grégoire had also indicated that the government would “increase social benefits” through pensions, before adding that the executive “will upgrade the treatment of civil servants. This will be done with the raising of the public service index point (…) the Macron bonus will no longer be exceptional but permanent ”. A calendar on which it was however necessary to backpedal and provide details. It will ultimately be two bills – one on the measures, the other on their financing – which will be presented after the legislative elections, the executive confining itself to a simple “communication” in the Council of Ministers before the ballot.

In addition to the issue of purchasing power, that of hospitals facing a shortage of staff was also raised by Ms. Borne. The Prime Minister on Friday asked the “ministers concerned” to “make proposals to her very quickly to take effective measures for the summer”. Finally, the head of government said she wanted to carry out the “construction site” of ecological planning “at a rapid pace”, calling on all ministries to “mobilize” and “participate”.

“But these emergency projects obviously do not exhaust the action of the government”, noted the Prime Minister, who gave “three watchwords: speed, efficiency and results”. In order to follow up on these roadmaps, Ms. Borne announced that a government seminar would take place “before the end of June” around Emmanuel Macron. And that she herself would bring together the ministers “in the same format” every month at Matignon.