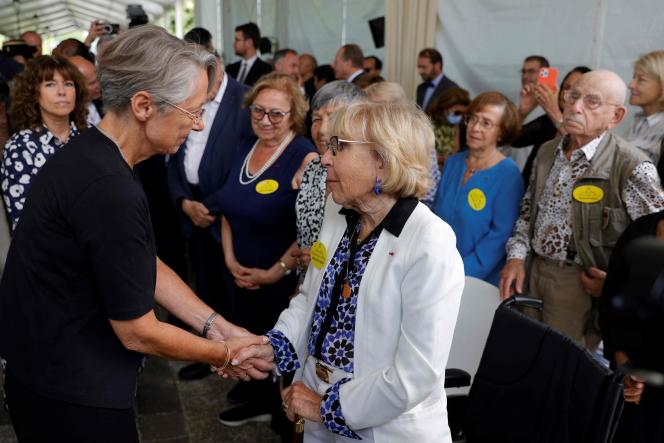 “It was 80 years ago and yet here the echo of horror still resonates”: Prime Minister Elisabeth Borne takes part in the commemorations of the 80th anniversary of the Vél d’Hiv roundup in Paris , Sunday July 17, before an expected speech by Emmanuel Macron from Pithiviers station (Loiret), in the middle of the afternoon.

At the site of the former velodrome in Paris, “France has delivered more than 13,000 people to torture, hatred, death”, recalled Ms. Borne before members of the representative bodies of the Jewish community in France, as well as several ministers and victims of the roundup. “It is indeed our laws (…), it is indeed our police” who organized and implemented the handing over of Jewish men, women and children to the German occupier, insisted the Prime Minister, referring to , by this roundup, “the transition from a France that protects to a France that betrays itself”.

“Our country had to and must look its history in the face”, also declared the daughter of Joseph Borne, Jewish and resistant, arrested by the Gestapo and then deported to Bunchenwald. “It is not being patriotic to tear up the pages of history that bother us, to hide them or to diminish them,” said Elisabeth Borne, triggering applause in the audience.

Emmanuel Macron, from a new place of memory in the old station of Pithiviers, from where eight convoys left for Auschwitz-Birkenau, must also denounce, on Sunday, “historical revisionism”, in particular about the role of Marshal Pétain during the Second World War, according to an adviser to the Elysée quoted by Agence France-Presse. From 3:30 p.m., the Head of State will deliver an “offensive speech” against anti-Semitism, which “still lurks and sometimes insidiously”, which is “very worrying”, specified the same source.

Accompanied by several personalities, including the historian Serge Klarsfeld and the survivor of the camps Ginette Kolinka, Emmanuel Macron is expected in the small Loiret station, a hundred kilometers south of Paris, which has not welcomed any more travelers since the end from the 1960s and which has just been transformed into a museum by the Shoah Memorial.

It was through this station that some of the 13,000 Jews – including 4,115 children – passed through, arrested in Paris and the suburbs on July 16, 1942 and the following days, by 9,000 French officials. More than 8,000 of them, including the elderly and the sick, were taken to the Vélodrome d’Hiver stadium in the 15th arrondissement of Paris. Before being evacuated to the camps of Drancy (Seine-Saint-Denis), Pithiviers and Beaune-la-Rolande (Loiret).

From Pithiviers station alone, eight convoys then left for the extermination camps, representing more than 8,000 deportees, making it the second largest deportation site in France after Drancy. Only a few dozen adults will survive.

In his speech, lasting about twenty minutes, Emmanuel Macron should affirm that “the fight continues” against anti-Semitism, following “the path that President Chirac had traced”. After fifty years of silence from the French authorities, Jacques Chirac had recognized, in 1995, the responsibility of France in the roundup of Vel d’Hiv, in a speech that remained engraved in the memories. “France, that day, accomplished the irreparable,” he said.

In July 2012, François Hollande had gone further by declaring that “this crime was committed in France, by France”. Then in 2017, Emmanuel Macron, newly elected president, reaffirmed France’s responsibility for the 75th anniversary of the roundup and made a plea against anti-Semitism in the presence of Israeli Prime Minister Benjamin Netanyahu.

But today “French society has not finished with anti-Semitism”, underlines the Elysée, also highlighting the “trivialization of debates” around the Vichy regime. Far-right presidential candidate Eric Zemmour (Reconquest!) notably argued that Marshal Pétain had “saved” French Jews during World War II. Elected officials from the National Rally were also invited to Pithiviers, by republican tradition, detailed the Elysée, without specifying whether they would be present.