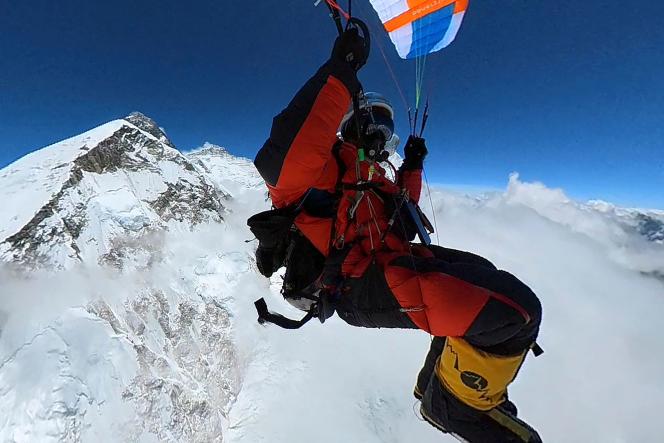 Twenty breathtaking minutes. “It was a magnificent flight. Above, then through and below the clouds”: Pierre Carter launched himself last week for the first time legally near the summit of Everest, the highest mountain in the world, for an extremely rare flight.

The 55-year-old South African paraglider flew from the South Col of Everest, around 8,000 meters above sea level, the expedition organizer said on Tuesday May 24. In total, it took him only twenty minutes to reach the village of Gorakshep, located at 5,164 meters.

The weather conditions deterred him from launching from the summit of Everest, 8,849 meters above sea level. “The higher you are, the more difficult the takeoff, because the air pressure becomes more important, and your glider does not fly as easily anymore,” Peter Carter explained to Agence France-Presse (AFP).

This performance is remarkable, according to Dawa Steven Sherpa, of Asian Trekking, an expedition company based in Nepal, interviewed by AFP: “This is the first time that Nepal has issued a flight permit on its mountains”. This experience should, according to him, inspire more than one mountaineer next season now that the Nepalese authorities seem open to allowing flights from the peaks of the Himalayas. Indeed so far, only three flights had been recorded from Everest, all carried out without government authorization.

A veteran of exploits

The first, the French mountaineer and pilot Jean-Marc Boivin, had descended the summit by paraglider in 1988. In 2001 a French couple had imitated him in tandem, a feat repeated ten years later by two Nepalese mountaineers.

“The authorities now see that this can boost the tourism industry in Nepal, especially after the Covid,” said Dawa Steven Sherpa. The country only reopened its peaks to mountaineers last year, after the Covid-19 pandemic.

Carter is not at his first attempt. He started climbing as a teenager and quickly became interested in paragliding, a discipline in which he subsequently multiplied his exploits. Since 2005, it has soared from five of the seven highest peaks on different continents, starting with Mount Elbrus in Russia.

In 2016, Carter summited Denali, Alaska, but was not cleared to fly. His next goal would be to repeat the feat atop Mount Vinson in Antarctica. Since the start of the season, at least three mountaineers, including a Russian and two Nepalese, have died trying to climb Everest.

“Prehistoric Planet”, on Apple TV: a trip to the time of the dinosaurs with stunning realism

News Editor - May 25, 2022 0
The lifeless bodies of four of eight miners trapped hundreds of meters underground for 39 days in a zinc mine in Burkina Faso have...

Patrice Lumumba’s tooth will be returned to the DRC at a...