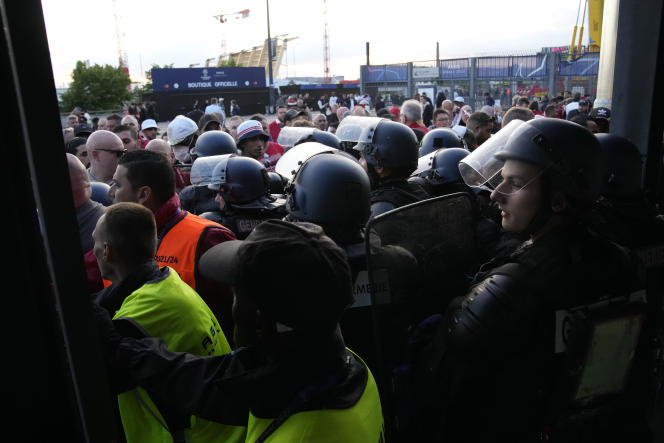 Just over 2,000 police and gendarmes, including 650 dedicated to the fight against crime around the Stade de France in Saint-Denis (Seine-Saint-Denis) will be mobilized on Friday June 3 to ensure the security of the France-Denmark match after the fiasco of Saturday, announced Thursday evening the Prefecture of police of Paris.

For this meeting, which does not present any particular risks, according to several police sources interviewed by Agence France-Presse, the Prefecture of Police indicated that “nearly 77,000 spectators [were] expected”. “1,800 tickets have been allocated to Danish spectators,” she added. Last Saturday during the Champions League final between Real Madrid and Liverpool, 22,000 tickets were allocated to English supporters, as many to Spaniards.

The Prefecture of Police clarified that it was putting in place on Friday a device “oriented on public order, the fight against crime and the regulation of the flow of people”. In addition, she added, “in order to contain the impact of the strike announced at the RATP, a specific flow regulation device is put in place at the exit of the RER D”. Last Saturday, there was also a strike at the RATP which had affected, according to the Minister of the Interior Gérald Darmanin and the Prefecture of Police, the transport of spectators to the stadium.

To avoid the snatching and other acts of crime that took place on Saturday evening around the stadium, the PP has planned to devote just over 600 “staff to the fight against crime in the vicinity and on the outskirts of the stadium. of France, as well as at transport stations”.

The protective perimeter of the stadium will be put in place “from 3:00 p.m.”. “Ticket verification, under the control of the organizer, will be carried out at the access terminals. The security forces will ensure upstream and on the forecourt to maintain public order and security, ”detailed the Prefecture of Police.

This significant deployment of law enforcement for a meeting which is not considered to be at risk comes after the chaos which surrounded the Champions League final. Several police sources interviewed by Agence France-Presse quipped about the scale of the device planned for Friday, worrying that the fiasco of last Saturday did not provoke an investigation into the chain of command.

The images of spectators gathered behind the gates of the Stade de France, of police intervening with tear gas have gone around the world, triggering a lively controversy that goes far beyond the borders on the capacity of France to welcome in two years the Olympic Games.