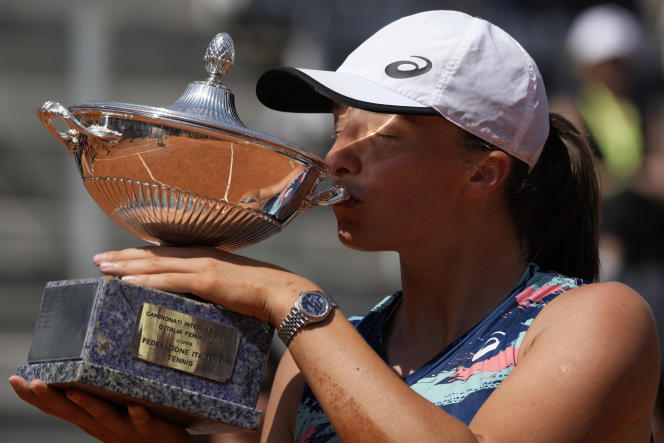 Iga Swiatek is unstoppable. The Polish tennis player won, on Sunday May 15 in Rome, a fifth tournament in a row, without blinking, against the Tunisian Ons Jabeur, 7th in the world (6-2, 6-2). The world number 1 thus retains her title in the Italian capital and confirms her status as the big favorite for the coronation at Roland Garros (from May 22 to June 5).

In the absence of her rival of the day, forfeited to rest a sore arm, Ons Jabeur won last week in Madrid, becoming the first player in the Arab world to win the WTA 1000, the most prestigious tournament category after the Grand Slams. But on the clay courts of Foro Italico, she was able to measure the gap that still separates her from the Polish.

Combative, but visibly marked by the battles fought in the quarters and then in the semi-finals to reverse badly embarked situations, the Tunisian could not do anything against the Pole. Especially since Iga Swiatek started strong by breaking twice to win the first set, then again to lead 4-0, service to follow, in the second.

Ons Jabeur then tried again for the improbable turnaround, stealing his opponent’s face-off to come back to 4-2 and coming close to coming back to 4-3. The defending champion then showed that she also had the character to save four break points and preserve her lead, before concluding in stride.

Iga Swiatek flew over the debates throughout this transalpine week, not giving up any set towards this eighth title of his career. The 20-year-old Pole is continuing a streak of 28 straight wins, which has already seen her win tournaments in Doha, Indian Wells, Miami and Stuttgart. She has conceded only one round in her… last twenty meetings.

Her last defeat dates back to February 16, in the second round of the Dubai tournament against Latvian Jelena Ostapenko. Since 2000, only Venus Williams (35), Serena Williams (34) and Justine Henin (32) have had longer winning streaks.

So many statistics that make her the player to beat Porte d’Auteuil, where she won in 2020.