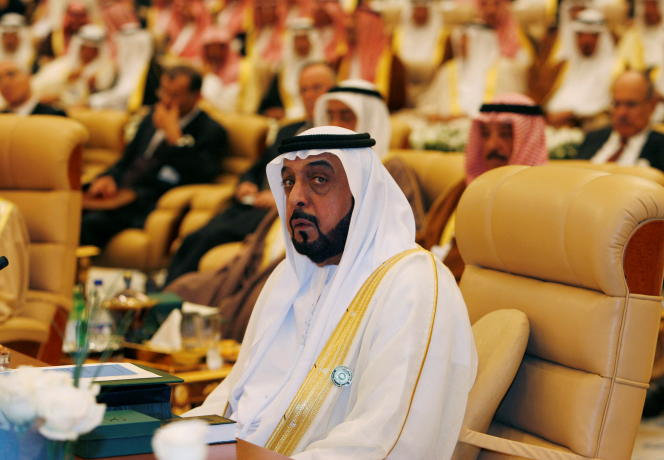 Over the past two decades, he had accompanied his country’s meteoric rise on the international scene. The President of the United Arab Emirates, Khalifa Bin Zayed Al Nahyan, has died at the age of 73, local authorities announced on Friday May 13.

The government of this Gulf country has decreed “an official mourning and the flags at half mast” for a period of forty days, reports the official news agency WAM. The next three days from Friday will also be non-working. The portrait of the late president was immediately displayed everywhere in the streets, institutions and even hotels of the emirate.

Rarely seen in public since suffering a stroke in January 2014, Khalifa Bin Zayed Al Nahyan is expected to be replaced shortly by his half-brother, Abu Dhabi Crown Prince Mohammed Bin Zayed, known as “MBZ”. who was already considered the de facto ruler of the country.

“Khalifa Bin Zayed, my brother, my mentor and my teacher, may God have mercy on you,” Mohammed Bin Zayed tweeted. “His positions, achievements, wisdom, generosity and initiatives can be found in every corner of the country,” he added.

After the establishment of the federation in 1971, Khalifa Ben Zayed Al Nahyan was appointed deputy prime minister, and then chaired the Superior Petroleum Council, a body endowed with broad powers in the energy field.

Under the mandate of Khalifa Bin Zayed Al Nahyan, the Emirates experienced rapid economic growth, driven by the oil wealth of Abu Dhabi, which concentrates 90% of the federation’s reserves, and the affirmation of Dubai as a center of finance, luxurious tourist destination or air transport hub. But, like its president, the Emirates have remained relatively discreet on the international scene, generally standing behind its great ally, Saudi Arabia, juggernaut of the Gulf and the Arab world, of which it remains the first economy.

According to observers, it is under the impetus of Prince Mohammed Ben Zayed that the country is gradually emerging from its usual discretion, particularly since the 2010s by gaining growing influence in the Middle East and Africa. Abu Dhabi even participates in military interventions against the Islamic State group in Iraq and Syria, then in Yemen, alongside the Saudis, to fight the Houthi rebels, close to Iran.