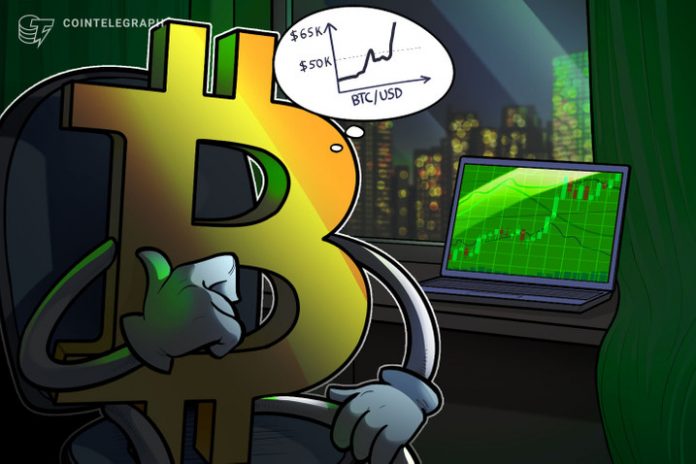 Analyst Willy Woo identifies three indicators on the chain that track the flow and movement of Bitcoin tokens between wallets. Each indicator illustrates why the benchmark cryptocurrency might explode higher.

In his recent newsletter, the market researcher wrote that he expects Bitcoin prices to reach the $50,000-$65,000 range in the coming sessions. He made these comments as Bitcoin/USD recovered its three-month high of $42,600, just days after it crashed below $30,000 (the pair’s psychological support level).

Woo stated that “my expectation is similar to BTC at $20k high in January, where price is pinned near the $40k-$42k limit over a period (2 weeks maximum), wearing down sellers, and then a faster move towards $50k.”

Bitcoin’s rise to $42,600 was also due to Federal Reserve Chairman Jerome Powell admitting the possibility of inflationary shocks in an interview last Wednesday. Bitcoin is a hedge against rising consumer prices, according to crypto bulls.

What’s noteworthy is that the period of Bitcoin’s price recovery from under $30,000 coincided with an increasing liquid supply shock. BTC was removed from exchanges due to strong holders locking them away as long-term investments, according to Woo.

The analyst wrote Aug. 1 that the Liquid Supply Shock level is at a level consistent with a $55K price point. This was in reference to the large deviation between current Bitcoin prices and the available supply.

“Despite a strong 44% rally in under 2 weeks, we remain in a heavily discounted area for BTC.”

The May ban by China on cryptocurrency activities played a critical role in lowering Bitcoin prices this summer. This decision paralyzed the crypto mining industry in China, which accounted for over half of global Bitcoin production.

Glassnode reported in June that miners either closed down their rigs to comply with the new law or shifted their operations outside China, thereby incurring additional costs to keep their production running.

Data analytics platform also indicated that miners might liquidate some of their Bitcoin holdings in order to pay for additional expenses. As it turned out, miners’ net BTC accumulation trend reversed by May, which was a sign of capitulation.

Woo pointed out that miners had resumed Bitcoin accumulation in July. He cited the popular Bitcoin Hash Ribbon metric, which tracks the network’s expansion and loss of hash rate, noting that it was recovering for the first time since the China ban.