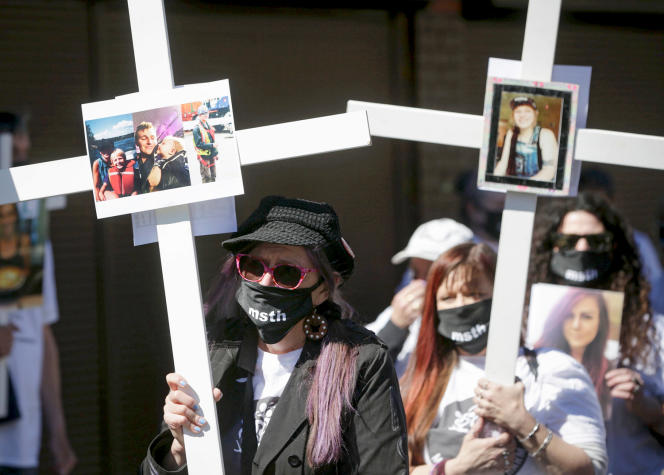 The epidemic is blazing from coast to coast, setting cities and towns ablaze. In the Yukon, in northeastern Canada, one of the least populated territories in the country, it killed 23 in 2021, an increase of almost 500% compared to 2020. In the Great Plains of Alberta , 576 deaths were reported in the first six months of 2021.

In Timmins, a small town 700 kilometers north of Toronto, the peak in excess mortality is also maddening. “We distribute more syringes than sandwiches”, is moved by a social worker from the municipality. But the epicenter of the phenomenon is in British Columbia: more than 4,000 people have died of drug overdoses in the past two years. A carnage greater than that caused by Covid-19, with 3,469 deaths.

Submerged, this province in the west of the country, which had declared itself in a “state of health emergency” in 2016, was authorized, on May 31, to derogate from the law in force in Canada: for three years , possession of small amounts of hard drugs will no longer be a criminal offense in British Columbia. Consumers will therefore no longer be considered as criminals to be prosecuted, but as people to be helped, even sick people to be treated.

The substances targeted are cocaine, methamphetamines, MDMA (ecstasy) and opioids, including heroin, morphine and fentanyl. This last family of opiates, particularly addictive powerful analgesics, is responsible for the vast majority of accidental overdoses, 27,000 for all of Canada since 2016.

Appearing in the United States in the early 1990s, the so-called “opioid crisis” spread like wildfire in Canada. After its approval in 1996 by Health Canada to treat “all types of pain”, OxyContin, distributed by the American firm Purdue Pharma, became in a few years the most popular drug in the country.

In 2012, after the appearance of the first controversies related to the risk of dependence, it was withdrawn from the market. But the pharmaceutical industry immediately found an alternative: fentanyl and its derivatives. To medical over-prescription, which creates thousands of consumers addicted to these synthetic opioids, will be added the enthusiasm of organized crime for this new El Dorado. The profit margin would make any investor dream: 25 grams of fentanyl costs $420 to produce, it fetches $800,000 on the black market.

The Covid-19 pandemic has boosted this already growing sector. Marie-Eve Morin, an addictologist in Montreal, has been receiving patients struggling with addiction problems for twenty years. Lawyers, construction workers, truck drivers or nurses, all eager to calm their physical pain or simply their discomfort. “With the isolation measures and health restrictions, everyone’s anxiety has increased a notch,” she says. Some dived at that time. »

The closing of the borders in March 2020 also brutally dried up the supply of heroin and cocaine from Mexico, Colombia or Afghanistan. But faced with the demand, the traffickers adapted and multiplied the clandestine laboratories on Canadian soil.

“Within a few days, we saw the arrival of so-called pink, purple and then blue heroin,” recalls the doctor. Nothing to do with heroin, in reality it was fentanyl, forty times stronger. Unaware of the risk, consumers, old and new alike, were caught in the trap. For the month of July 2020 alone, Montreal experienced 28 deaths by overdose, a record. Marie-Eve Morin herself has lost friends and a dozen patients over the past two years.

The inevitable debate on the legalization of hard drugs

“The pilot project in British Columbia is a step in the right direction to stop the stigma that consumers were subjected to and perhaps allow them to dare to come out of shame to ask for help,” said Jean. -Sébastien Fallu, professor specializing in drug addiction at the University of Montreal.

However, he is convinced that this measure will not be enough to put out the fire. Because the real danger, he explains, lies above all in the “poisoned supplies”, linked to the black market, responsible for the majority of overdoses. He himself participates in itinerant drug checking programs in Montreal, intended to inform consumers of the real composition of their doses purchased on the street, in an attempt to limit the risks.

“To escape adulterated opioids, there is no miracle recipe, you have to control their manufacture and distribution, and it’s up to the state to do it,” he said. Canada will have no choice but to confront the debate on the legalization of hard drugs. »

A step that Liberal Prime Minister Justin Trudeau, who legalized cannabis in 2018, does not seem ready to take. While he agreed to the “experimentation” in British Columbia, he refused to endorse the desire of his leftist ally, the New Democratic Party, to decriminalize hard drugs across the country. The epidemic is flaring up, but, argued Justin Trudeau, it must be done “step by step”.