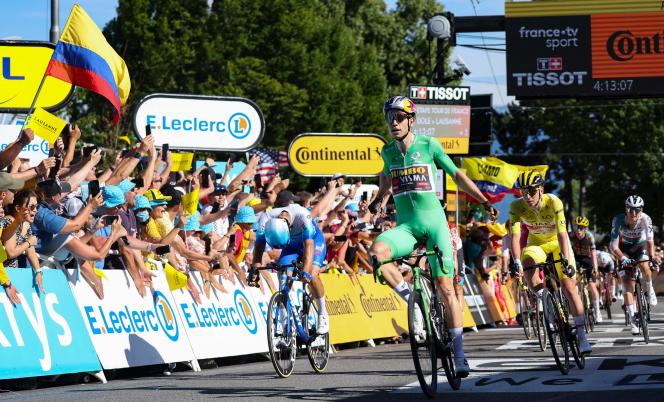 At 30, Geoffrey Bouchard was hoping for a slightly different epilogue for his first Tour de France. But fate decided otherwise. And said fate did not tread too hard, bringing out a hackneyed recipe of the past two years: the Covid-19. The AG2R-Citroën climber had to throw in the towel on Saturday morning July 9 after testing positive for SARS-CoV-2. The day before, he had felt the first symptoms during the Belles-Filles board stage (Haute-Saône).

A little later, another package put teams and riders on edge, that of the Norwegian Vegard Stake Laengen, teammate of the yellow jersey Tadej Pogacar. Not enough to make the Slovenian lose his eternal smile, but he nevertheless recognizes that he is losing a precious rider, always present to put him back in the peloton. “He was very strong, in good condition, ready to ride on the flat, on the climbs, everywhere… It’s going to be hard without him, but I think we can do it with seven riders until Paris,” assured the Slovenian, 3rd in an 8th stage won by the other glutton of this Tour, the Belgian Wout van Aert, on the heights of Lausanne (Switzerland).

In his entourage, it is not hidden that the double defending champion fears a possible contamination (and a forced return to his Monegasque home) much more than a waste of time on one of his rivals, always reversible.

The health situation – and its potential consequences – animated a very bleak Saturday between Dole (Jura) and Lausanne despite a favorable course on paper for the attackers. Wout van Aert (Jumbo-Visma) doubled the lead after a sprint with twenty-six riders, after his success in Calais on Tuesday.

The green jersey was ahead of the Australian Michael Matthews (BikeExchange) and a Tadej Pogacar happy to take four bonus seconds on the fly. As Benjamin Thomas (Cofidis) sums it up: “When it’s not Tadej, it’s Wout. But there are two weeks left, we hope they will get tired on the big mountain stages and give us opportunities on the easier ones. »

Saturday, the Italian Mattia Cattaneo (Quick-Step Alpha Vinyl) and the Briton Fred Wright (Bahrain Victorious), for a time supported by the Belgian Frederik Frison (Lotto-Soudal), also delivered a nice number with a breakaway launched from the start of the stage. Wright even pushed the resistance a little further, only to be caught in the first meters of the Olympic Stadium hill, 3.5 kilometers from the finish.

Still, the peloton has always been in control, leaving them little hope. Neither do the spectators. In short, the only two moments when a semblance of a shudder crossed this hot Swiss day were the collective fall that occurred at kilometer 9, delaying many leaders in the general classification – including Tadej Pogacar – and which cost the Tour to the American Kevin Vermaerke (DSM).

And then there was the unusual moment, 47 kilometers from the finish, which Thibaut Pinot will laugh about one day, but not right away. In wanting to grab his bag, the Frenchman received an involuntary nudge from the Trek-Segafredo assistant. Stunned, he ended up in the arms of a spectator, a little surprised, but masked.

A return of the “bubble”?

We’re not going to lie to each other, at forty-eight hours from the rest day and therefore mandatory Covid-19 screening tests, the head was a little elsewhere. The protocol of the International Cycling Union (UCI) may have been lightened and a positive result no longer being – in theory – synonymous with automatic exclusion from the event, the anxiety remains palpable.

The general manager of Groupama-FDJ, Marc Madiot, admits “not being a doctor”. But, he knows how to observe: “I saw what happened at the Tour de Suisse. When the virus arrives in the peloton, it spreads quickly. “In short, continues the Mayennais: “We live with a storm overhead that can blow up on us at any time. The situation generates some additional stress, concedes Guillaume Martin (Cofidis), even if “on a Tour, in general, illnesses are part of the game”.

After two years marked by the pandemic, the choice was made to learn to live with the virus. And this is where the gap with the peloton is felt. And opinions differ. Obviously difficult to remove the public from the side of the road, but should we return to a “bubble” system as was the case in the two previous editions?

For the manager of TotalEnergies, Jean-René Bernaudeau, the answer is obvious. “We take precautions with PCR test every three days and antigen test every day, and I am forced this morning at the start village to pass through the crowd. I don’t understand why we don’t protect this racing bubble more, this bubble is the future of this Tour, “he says.

Guillaume Martin, as usual, is more of a philosopher. For the general population, the Covid-19 is now less serious than it was, develops the runner. Difficult in these conditions to turn back. “We, the peloton, the Tour de France, we are only a microcosm, compared to the macrocosm that is the public. There are two points of view which are logical and not obvious. »

In Lausanne, in the “sub-microcosm” of followers, many of whom experienced the Tour “under a bubble” in 2020 and 2021, a certain fatality is gaining ground. In the press room, this Tuesday, more than the prowess of Wout and Tadej, the debate focused on the possible closure of access to the team coach area, a place of exchange with the riders and their management after the stages, where wearing a mask is already compulsory.