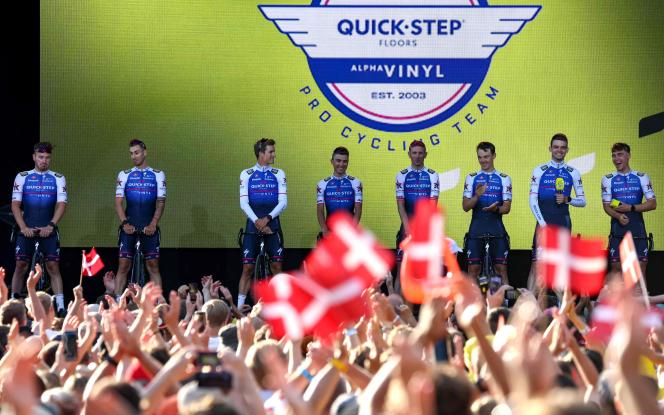 How many riders will leave the Tour de France roads (July 1-24) before its end, affected by Covid-19? After the last two editions shaken up by the coronavirus, the cycling event will have to deal with its resurgence. Several runners have already paid the price, including the Italian Matteo Trentin, replaced by the Swiss Marc Hirschi within the close guard of Tadej Pogacar at UAE Emirates, or the Frenchman Bryan Coquard (Cofidis), whose package was announced Thursday, June 30. A worrying situation a few hours before the big start, given on Friday in the streets of Copenhagen.

Also concerned by the withdrawal of a runner who tested positive for the virus – the Belgian Tim Declercq, replaced on Tuesday by the very recent French champion, Florian Sénéchal – the Quick-Step Alpha Vinyl team ensures to multiply the precautions. “We have to be constantly careful, explained Wednesday at a press conference Tom Steels, a former runner who became sports director of the Belgian formation. The risk is everywhere and the restrictions are not the same as those of the last two years. I apologize in advance to the spectators for our attitude towards them, but the Tour de France is too important a race for us. »

To limit their exposure, many riders also preferred to give up competing in their national championships on June 26. This is particularly the case for the headliners of Groupama-FDJ, David Gaudu and Thibaut Pinot, affected by Covid-19 at the end of the Tour de Suisse (from June 12 to 21) and now fully recovered. “We made the choice not to run Thibaut Pinot and David Gaudu to take no risk, given the health situation,” said their sports director, Benoît Vaugrenard, to the regional daily Ouest-France.

A strategy also adopted by Romain Bardet (DSM). Very strict on health protocols after having contracted several viruses in recent months, the Auvergne climber was worried on social networks when flying to Denmark. “Boarding a crowded plane for the big departure when 90% of the passengers are not wearing the mask. First stress test. Le Tour is on,” he tweeted on Tuesday.

Aware of the risk of accelerated spread of the virus within the peloton, the International Cycling Union (UCI) announced an increase in vigilance, in a press release published on Tuesday. A positive decision according to the riders. ” It’s logic ! As a team, we also take our precautions and have, I think, found a good way to protect ourselves. I feel safe, ”says Kasper Asgreen in front of the press. “The team doctor notably reminded me a few weeks ago that we have not experienced a big cluster within the group, so it is proof of our seriousness”, wants to believe the Danish rider.

However, the position of the UCI is variable in geometry. The world body has announced the possibility for asymptomatic riders to continue the Tour de France according to their state of form. “It’s good news, but it doesn’t change our view of the subject. If we are faced with this scenario, we will above all preserve the health of the runner, ”assures Tom Steels.

The UCI also waived a point of regulation which provided for the mandatory abandonment of a team as soon as two or more riders were infected over a period of seven days, such as during the Grande Boucle 2020. The disaster scenario known on the Tour de Suisse, where half of the entrants had to abandon, should therefore be avoided.

Vigilance is still required in a tense health context, but the message seems very clear: even if some runners leave, The Show Must Go On.