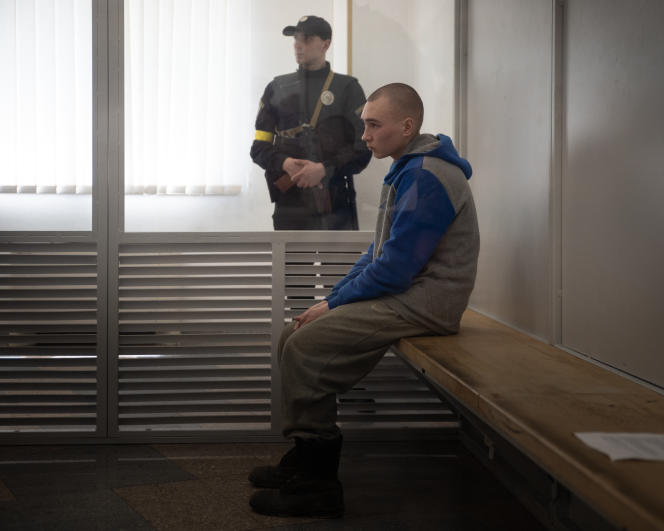 The first Russian soldier to be tried for a war crime since Russia invaded Ukraine, Vadim Chichimarine, was found guilty and sentenced to life in prison on Monday (23 May) in kyiv for the murder of a civilian . His lawyer immediately announced that he would appeal.

“The court has decided to find [Vadim] Chichimarine guilty and sentence him to life imprisonment,” Judge Serhi Agafonov said. Sergeant Chichimarine, 21, admitted to shooting dead Oleksandr Chelipov, a 62-year-old civilian, in the northeast of the country during the first days of the Russian army’s invasion of Ukraine. He is found guilty of war crimes and premeditated murder.

The soldier with a youthful face and a shaved head, dressed in a gray and blue hooded sweatshirt, listened, alone in a glass box, to the verdict read in Ukrainian while an interpreter translated it into Russian. “The murder was committed with direct intent,” the judge said. “[Vadim] Chichimarine violated the laws and customs of war,” he continued.

The annulment of the verdict requested

The prosecution had requested, Thursday, the maximum sentence, namely life imprisonment. The soldier had pleaded guilty the day before. He said in court that he acted under pressure from another soldier as he tried to flee to Russia in a stolen car with four other soldiers. This soldier, originally from Irkutsk, Siberia, had also “begged forgiveness” from Mr. Chelipov’s widow during a brief exchange with her in a courtroom in kyiv.

“This is the most severe sentence and any sane person would appeal,” said the young man’s lawyer, Viktor Ovsiannikov. “I will seek the reversal of the verdict,” he said.

Before the hearing, the Kremlin had declared itself “worried” for the fate of the Russian citizen, adding that it could not provide him with assistance on the spot due to the absence of diplomatic representation. “That doesn’t mean we won’t try through other channels. The fate of every Russian citizen is of paramount importance to us,” Kremlin spokesman Dmitry Peskov said.