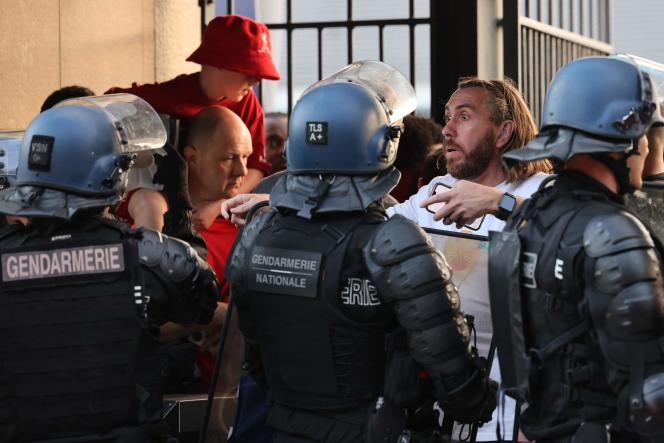 The incidents that marred the final of the Champions League football, organized at the Stade de France, in Saint-Denis (Seine-Saint-Denis), Saturday evening, did not fail to trigger political reactions, Sunday May 29, the oppositions criticizing the government’s ability to organize large demonstrations.

“We are not prepared for events such as the Olympic Games or the World Rugby Championship,” said Jean-Luc Mélenchon on BFM-TV, Sunday noon. Lamenting a “dismal image” for France and “a complete failure of police strategy”, the meeting between Liverpool and Madrid having started more than half an hour late after several police charges and sixty-eight arrests, the leader leader of La France insoumise questioned “the doctrine of employment of the police”.

Some spectators, despite having tickets on Saturday evening, were only able to access the stadium at the end of the first period. Many supporters tried to climb the gates of the enclosure in an attempt to force entry. Brief scuffles then opposed the police who repelled these intruders, sometimes using tear gas. The Paris police headquarters and then the Ministry of the Interior noted the use of counterfeit banknotes to justify delays at the entrance to the enclosure.

“We are watched by the whole world”

“They were bands of thugs that we know well from this department [of Seine-Saint-Denis] out of control in terms of security,” said Marine Le Pen on RTL on Sunday, without providing any evidence but citing the “sayings of foreign reporters”. The former president of the National Rally expressed her “feeling of humiliation” before commenting: “We are watched by the whole world and all the capitals who have seen this have found that France is no longer in ability to organize large demonstrations without them degenerating. »

Also on the far right, Eric Zemmour wrote on Twitter that, according to him, “the scum are completely intoxicated by the general impunity”. “It’s France that has a hangover,” said the former presidential candidate, campaigning for the legislative elections in the 4th district of Var. “It’s the usual racist refrain from these people who have nothing but absolute contempt for the population when it doesn’t conform to the idea they have of it,” Jean-Luc replied. Mélenchon on BFM-TV.

“A bit quick and cowardly to refer the problem to the British supporters alone”, reacted, for his part, the deputy of the Alpes-Maritimes of the Republicans, Eric Ciotti, specialist in law enforcement issues, on Twitter. “Full light must be shed on those responsible for this violence,” he said, in the same line as the United Kingdom’s ambassador to France, Menna Rawlings, who welcomed UEFA’s commitment to investigate: “The facts must be established”, commented the diplomat on Twitter a few hours after the meeting.