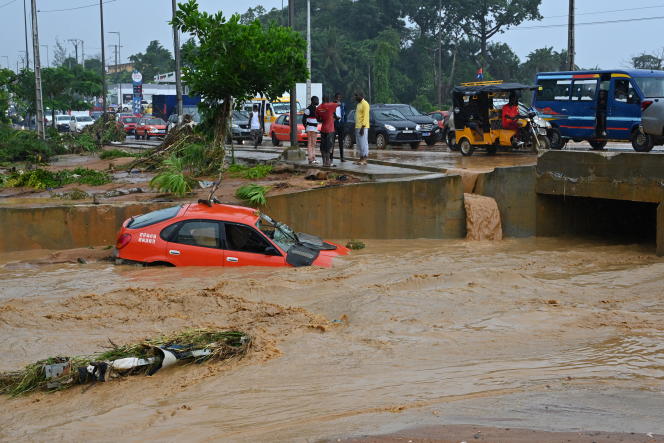 At least five people, including four children, died in floods in Abidjan after a night of heavy rainfall, firefighters announced Tuesday, June 21, mobilized in the many neighborhoods of the economic capital of Côte d’Ivoire affected by an intense rainy season.

“We have been in demand since 3 a.m. [local and GMT]. Sadly, five people, including four children, died. The children died in a landslide and the adult person was swept away by the waters,” General Issa Sacko, commander of the fire brigade, told AFP. 85 people were “brought to safety” and one evacuated to hospital, he added, adding that the deaths had been recorded in Bingerville, a commune of Abidjan.

“I have nothing left in the house. The water washed it all away. We have nothing to wear, to eat. Our files and diplomas, everything is gone. It is not the first time. But this time it overflowed too much,” Bingerville resident Pricile Ziyahe told AFP.

“The water rose until it broke the windows of the house. With the neighbors across the street, you couldn’t even see the roof of the garage anymore,” added Cynthia Koffi, a medical student who also lives in Bingerville.

Torrents of rain fell all night on Abidjan, flooding many neighborhoods and making several major roads impassable. The rains continued in episodes during the day on Tuesday.

Between Monday and Tuesday noon, parts of Abidjan received nearly 200 mm of precipitation, the equivalent of several weeks of rain, according to data from the Ivorian meteorological agency Sodexam, in partnership with the French company HD-Rain.

From early morning, residents of both upscale and working-class towns posted photos and videos on social networks showing their flooded homes or neighborhoods and calling for help. Last week, six people died in a landslide in the Mossikro neighborhood in western Abidjan, again after a night of very heavy rain.

The scenario of torrential rains followed by devastating floods is recurrent in the largest Ivorian city. Constructions in flood-prone areas, often inhabited by poor populations, are legion in this West African metropolis of more than five million inhabitants, in continuous growth.

In June 2018, eighteen people died in Abidjan after torrential rains. In June 2020, thirteen others had perished in a landslide. The heart of the rainy season, in this city with a tropical climate, June is traditionally the wettest month of the year, with an average of around 300 mm of water.

Côte d’Ivoire is to organize the African Cup of Nations in June 2023, a schedule that worries several observers.