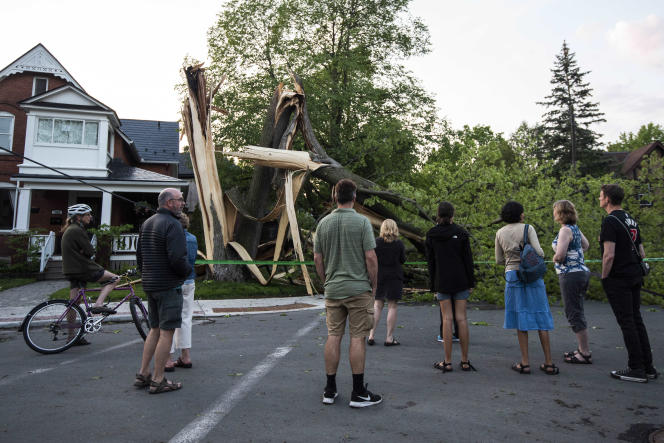 Canadian authorities announced on Saturday, May 21, the deaths of four people in the east of the country, hit by violent storms which also deprived nearly 900,000 homes in the provinces of Ontario and Quebec.

The Ontario Provincial Police announced on Twitter three deaths and several injuries. In particular, one person lost his life when a tree fell in the middle of the day on the trailer that housed him, in Brant County, south of Toronto.

In this same region, and a few minutes later, a woman over 70, traveling on foot in the storm, was also crushed by a tree, according to the same source. Further north, in the federal capital of Canada, Ottawa, a person lost his life, also due to thunderstorms, but the local police, during a press conference, refused to give more details.

A fourth person, a woman in her 50s whose boat capsized in the storm, drowned in the river separating Ottawa from its Quebec suburb Gatineau, according to information collected by Radio-Canada from local police. .

In addition, nearly 900,000 homes in eastern Canada were still without power as of Saturday evening: about 340,000 in Ontario and nearly 535,000 in Quebec, according to online counts from local energy providers, Hydro One. and Hydro-Quebec.