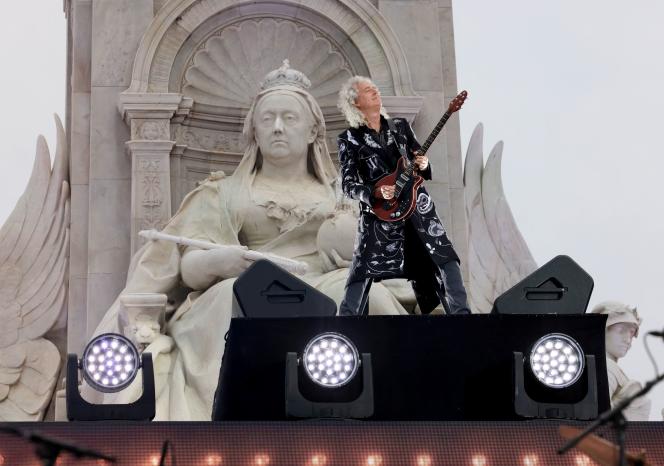 Elton John, Rod Stewart, Alicia Keys, Duran Duran, Andrea Bocelli… On Saturday June 4, the biggest names in the pop or classical scene paraded on stage, in front of Buckingham Palace, for a show closing the third and penultimate day of the 96-year-old Queen’s Platinum Jubilee celebrations, with unrivaled longevity in the UK.

Queen, with Adam Lambert on vocals, kicked off the evening with many of her hits like “We are the Champions”, in front of 22,000 spectators waving Union Jack flags, as well as Crown Prince Charles and his eldest son William, came with his wife Kate and two of their children. Tens of thousands of onlookers, without tickets, followed the concert on giant screens on the Mall, a prestigious artery overlooking the palace. “It’s wonderful to be back,” Queen guitarist Brian May told the BBC, twenty years after performing the national anthem “God Save the Queen” perched on the palace roof for the Queen’s Golden Jubilee.

But the real star of the evening, Elizabeth II, was absent due to poor health, having preferred to watch the concert on television, broadcast live on the BBC. Loved for her sense of duty and tongue-in-cheek humour, she did, however, make a surprise appearance in a short humorous video released before kick-off, where she has tea with clumsy icon Paddington Bear. British children’s literature.

The heir to the crown, Prince Charles, 73, paid tribute to “Her Majesty” who is also his “mum”. “Thank you” for this “whole life spent in the service of others,” he said, in front of a cheering crowd. “You have laughed and cried with us and above all, you have been there for these 70 years,” he added, recalling the promise Elizabeth made, princess, at 21, to serve her subjects all her life. .

Despite her health concerns, the queen shows no desire to abdicate, even if she increasingly hands over to her eldest son to represent her. His grandson William gave him a plea for the planet in front of a palace serving as a backdrop for majestic illuminations. A symbol of stability in a century of great upheaval, the ultrapopular Elizabeth II ascended the throne at the age of 25 on February 6, 1952.

Many pre-recorded tributes also poured in during the evening, from celebrities like James Bond actor Daniel Craig, former First Lady of the United States Michelle Obama or pop legend Elton John, who delivered a moving performance of “Your Song”. American diva Diana Ross, 78, “absolutely delighted to have been asked to perform on such an important occasion”, brought a two and a half hour evening celebrating the contribution of the UK and the countries to a close. of the Commonwealth to music, the environment, sport and musicals over the past 70 years.

A joyful parenthesis of patriotic unity in the midst of a cost-of-living crisis, the Jubilee celebrations last until Sunday, thanks to a long four-day holiday weekend. The Queen has so far only appeared on the first day on Thursday, cheering twice on the balcony of Buckingham Palace.

But having then suffered from “discomfort”, she missed Friday’s religious service in her honor at St. Paul’s Cathedral. Yet passionate about horses, she also gave up on Saturday to go to the famous Epsom Derby horse race, which she very rarely missed. His participation for the curtain down on Sunday has not been confirmed. Among those absent from the concert on Saturday were also Prince Harry and his wife Meghan, who came from California but who had chosen to celebrate the first birthday of their daughter Lilibet, whom the queen would have met for the first time, in private.

On Sunday, the rain could spoil the party when tens of thousands of outdoor lunches between neighbors are planned. A large parade should end the celebrations at the end of the afternoon in London with some 10,000 participants. It will end in front of Buckingham Palace, where Ed Sheeran is expected to sing his famous ballad “Perfect” in honor of the Queen.

Many of those attending the jubilee celebrations were aware that this might be the last time they would see their sovereign. “She is our last queen. And I think she’s a wonderful queen,” Wendy Flynn, a stay-at-home mom at a street party in London, told Agence France Presse.

In London, a giant concert and a rain of stars to...