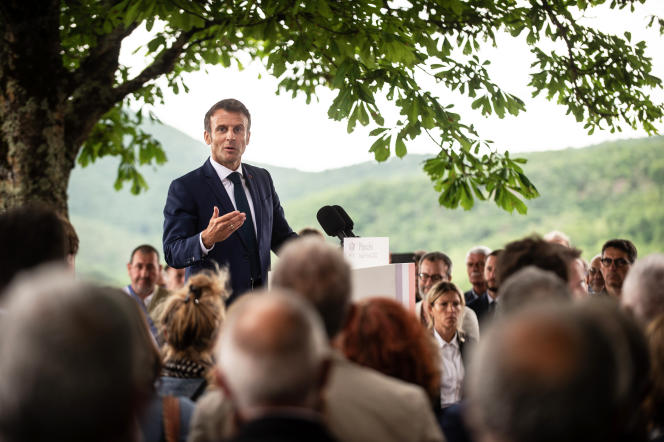 Res-pon-sa-bi-li-ty: the word is on everyone’s lips in this post-election period. Faced with a risk of blocking our institutions and public action, everyone is placed before their own. In his televised address on June 22, the Head of State, for lack of an absolute majority in the National Assembly, called on the government and the elected deputies of the Together! to deal with this unprecedented situation “either by building a coalition contract, or by building text-by-text majorities”.

At the same time, he asked the oppositions to get out of “quarrels and political postures” to reach “compromises”. His political opponents answer him in unison that it is, on the contrary, Emmanuel Macron to be “responsible” by sketching out a project that takes into account the new balance of power. The dialogue of the deaf can last a long time.

The responsibility for our representatives is not just to seek consensus for consensus’s sake. The first would be to nudge the country out of the denial it has locked itself in since the “whatever it takes” rollout. The cornucopia of “magic money” manufactured by central banks has anesthetized minds and political programs, which only talk about the redistribution of wealth without asking how to afford to create more of it first.

During the presidential election campaign and the legislative campaign, the software of politicians seemed stuck in the mode of unbridled post-Covid-19 growth. Regardless of the war, inflation, rising interest rates, the specter of recession, France continues, with guilty levity, to widen its deficits and inexorably run up debt in the face of the injunctions of public opinion. public never satiated.

The expenditure for only compass

At the cost of a unique budgetary effort in Europe, the government has reduced the inflation bill for households by two points compared to the euro zone average. But who pays attention to these tens of billions swallowed up by rising prices? Pending the presentation of a new “purchasing power” law before the Assembly, the time remains for one-upmanship, as if the measures already adopted had only served to water the desert.

The increase in public spending has become the only compass of French politics. Yet, the deterioration of the macroeconomic context leaves little doubt: sooner or later, unpopular measures will have to be considered. It remains to find the brave to take them on.

Two-thirds of French people say they are opposed to raising the retirement age, the only binding reform pushed more and more timidly by the majority. Let’s admit. Intellectual honesty, however, obliges us to alert public opinion to the fact that the savings that such an effort would generate are already being erased by the increase in the debt burden caused by the rise in interest rates. However, the phenomenon is only in its infancy.

Failing to reduce the standard of living of the nation, only three answers are possible: more debts, more taxes or both at the same time. In this regard, it is always surprising to note that young people are more likely to reproach their elders for leaving them a climate debt, than to mention the thousands of billions they inherit in terms of financial debt. However, our children will have to assume both.

A certain sense of responsibility also rests with companies. The largest of them have never been in such good shape, we learn from the latest study by the firm EY on the financial profile of the CAC 40. Business in strong growth, profitability at its highest, level of debt at its lowest: all the indicators are green at the end of the crisis caused by the pandemic. As for the rise in interest rates, most groups approach it with serenity after having cleaned up their balance sheet. “The extraordinary harvest of profits in 2021 has enabled companies to reconcile debt reduction, shareholder payments and investments”, summarizes Nicolas Klapisz, co-author of the study. So what about employees?

Without doubting for a moment the talent of our captains of industry, the excellent health of companies owes a lot to the budgetary efforts made by the government during the health crisis. They also benefit greatly from the tools put in place to limit inflation. Energy price caps help maintain their competitiveness, while subsidies paid to consumers protect their order books. Finally, the supply policy, implemented since 2014, has led to a significant drop in labor costs.

It is time for companies to return the elevator to the public authorities by taking their part in the fight for purchasing power, thanks to an increase in remuneration that many of them are able to assume. Moreover, it would not be absurd, following the example of what was decided in the United Kingdom, Italy or Hungary, to involve energy suppliers, whose profits are soaring with the explosion world prices. In a column published in Le Journal du Dimanche on June 26, they rightly call on the French to be more “responsible” about their energy consumption. They also have to be reasonable themselves about the accumulation of their profits.

As for the pension reform, for which the Medef is campaigning, the commitments of business leaders to secure the end of their careers are long overdue. France remains the European country with the lowest employment rate for people over 55. Making the subject a national cause would no doubt make the idea of ​​a legal increase in the retirement age more audible. In this critical period for the cohesion of the country, responsibility is everyone’s business.