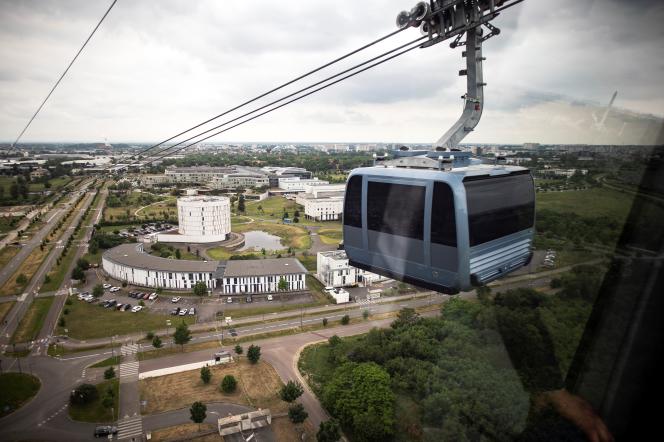 Téléo has taken off, and it is a relative breath of fresh air for Toulouse traffic. The longest urban cable car in France was inaugurated on Friday May 13 by representatives of the communities that financed it (town hall, region, state, European Union). With a total cost of 83 million euros, to which must be added 2 million euros a year for maintenance, it has around fifteen cabins which now connect the Paul-Sabatier University to the Oncopole University Institute of Cancer, via Rangueil university hospital center. A trip of about ten minutes south of the city, a distance of three kilometers.

“It’s not a gimmick and the trip is worth a look,” said Jean-Luc Moudenc, Les Républicains (LR) mayor of Toulouse. The studies for the implementation of Téléo, imagined by the former mayor Philippe Douste-Blazy (2001-2004), resumed in 2014 to unclog the southern exits of the Pink City, as well as to connect the three scientific and medical sites . The Paul-Sabatier University has more than 30,000 students and 4,600 employees, the Rangueil hospital records 210,000 consultations per year and 35,000 emergency room admissions, and the Oncopole represents 4,500 jobs. “With 8,000 passengers expected per day, this will not be enough to blow up the traffic jams on the ring road, specifies Jean-Michel Lattes, president of the Tisséo transport authority. Téléo is a first step towards transverse transport, while the Toulouse axes, metros, trams and buses, were until then built in a star shape, converging towards the city centre, ”specifies the elected official.

A year and a half behind schedule

The technological prowess was entrusted to POMA, a specialist in cable transport, supported by Bouygues. The cabins, which can carry around thirty passengers, were designed by an Italian designer specializing in the automobile, Paolo Pininfarina. Every one and a half minutes, at the price of 1.70 euros per trip, they climb along three cables, two porters and a tractor, a guarantee of safety, even in the event of high winds. This system has also made it possible to reduce the number of pylons: only five, compared to twenty for a traditional single-cable technology.

With a year and a half behind schedule due to the Covid-19 crisis, this cable car should also delight tourists. Sometimes 70 meters high and 20 km/h, it reveals the university campus, the climb to the wooded hill of Pech-David, before plunging back and crossing the Garonne, views of the Pyrenees and the largest photovoltaic power plant in France. understood. For Carole Delga, the socialist president of the Occitanie region, Téléo, which “mobilized for the first time European funds for soft transport, is the fruit of shared political will”.