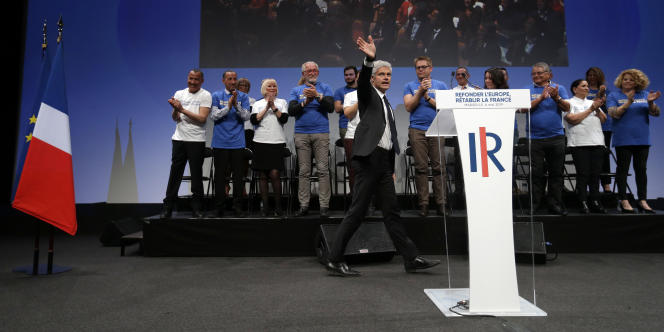 The president of the Auvergne-Rhône-Alpes region, Laurent Wauquiez, gave up, on Sunday July 17, to run for the presidency of his party, Les Républicains, which must appoint Christian Jacob’s successor in the fall. “Today, after thinking a lot, I have decided not to be a candidate for the presidency of the Republicans”, announced the former minister of François Fillon in a long text published on Facebook, with the false airs of declaration of candidacy – early – in the presidential election of 2027.

“This choice, I make it because I believe that we must devote all our energy to this refoundation to which our country aspires. Such a requirement does not support any dispersion. You have to give yourself totally to it; you have to distance yourself from the political fight, ”adds the one who led the right-wing party from 2017 to 2019.

“The alternative we need to build must go beyond questions of devices. I am convinced that this is the only path that will make it possible to meet the great democratic choice of 2027. It is, neither more nor less, than building a change of the same nature as that of 1958 “, continues Mr. Wauquiez. “The subject is neither Emmanuel Macron nor Marine le Pen, the subject is the aftermath,” insists the 47-year-old elected official.

A decision that should pave the way for competition

LR must convene its congress in the fall to appoint the successor to Christian Jacob, who left the presidency of the party on July 1 after having held the position for three years. He was temporarily replaced by number two, Doubs MP Annie Genevard.

Mr. Jacob had made Laurent Wauquiez his favorite to succeed him. But the president of Auvergne-Rhône-Alpes since 2016, who has made this region the laboratory of his national ambitions, seems to have another political agenda.

His decision should pave the way for competition. The names of party secretary general Aurélien Pradié, deputy for Lot, former minister Rachida Dati, mayor of the 7th arrondissement of Paris, or mayor of Cannes David Lisnard, president of the Association of Mayors of France, circulated as potential contenders for the party presidency.

News Editor - July 17, 2022 0
On the Tour, the rest day is often that of the laundry for the followers. On the Jumbo-Visma side, the machine should be running...