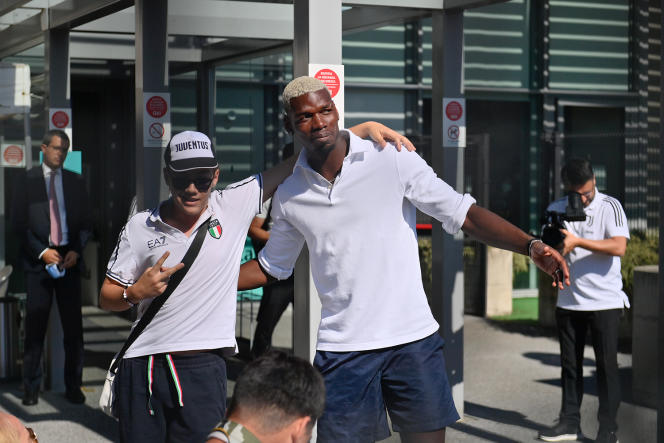 He is back. Or rather è tornato. Last weekend, Paul Pogba returned to Juventus Turin, the club that saw him break through at the highest level between 2012 and 2016. After six years at Manchester United, the Blues midfielder hopes relaunch his career in Italy. At 28, can he afford it? Is he still a great player, able to make a difference on the pitch, or is he now just a star who is more comfortable in the city and on social media? The only certainty: in the face of the dozens of Turin tifosi who came to welcome him like a rockstar, Pogba was perfectly at ease.

Landed on site in a massive and immaculate Jeep (the American brand, owned by the Fiat Chrysler group, is shirt sponsor of Juventus), Paul Pogba thus offered long minutes of spectacular poses and thumbs up to his supporters. In return, they were able to see that, despite the years that had passed, the player had not given up on hair adventures or eyebrows cut in the style of rapper Big Daddy Kane, inventor of this stylistic gimmick in the 1980s.

More surprisingly, they also noticed that Pogba was wearing a very special kind of pique cotton polo shirt that day. White with long sleeves and fitted with a shirt collar, it is similar in all respects to the legendary polo shirt of the Italian brand G. Inglese worn in its time by Gianni Agnelli, legendary owner of Fiat and therefore of Juventus. So, total coincidence or subtle strategy of seduction? While we’re looking for the answer, at least we’re not thinking about that swimsuit worn underneath.

To film the event, the Turin club had sent an in-house cameraman, fully dressed in the club’s colours: black five-pocket trousers, a white polo shirt with black stripes… Juventus has worn both colors since 1903. Founded in 1897, the Turin club had , at first, wore pink jerseys. But, noting that these were fading over time, the leaders took advantage of a contact in England to order black and white jerseys similar to those worn by the Notts County team. Since then, the Bianconeri have never changed.

Finally, how not to salute here this Juventus supporter clinging to the arm of Paul Pogba, just like the tipsy cousin who hangs from that of the bride at the most crucial moment of the ceremony? The crooked cap, the crooked glasses, the crooked satchel, the crooked shorts, the young man punctuates his pose with a gesture of fingers whose meaning necessarily questions. Is it the V for victory, the very common peace sign in Asia, the hello of bikers, or the V sign used as a middle finger by the Anglo-Saxons? He probably doesn’t know it himself.