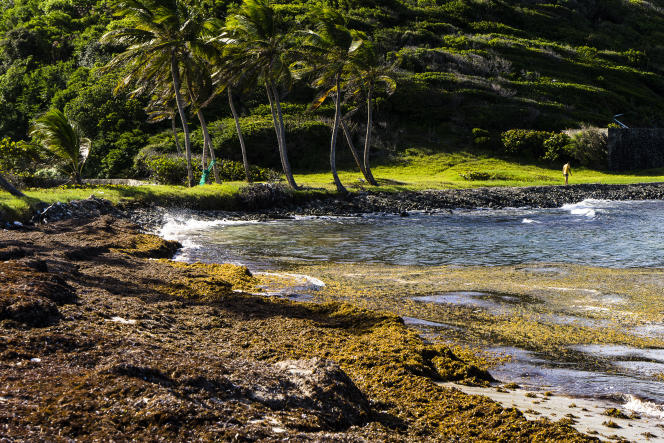 Some courts have already ruled that the seller of a dwelling who conceals the presence of an annoying neighbor or an insolvent tenant is guilty of deception. What about someone who conceals the existence of a notoriously well-known plague, such as, in Martinique, the periodic stranding of Sargassum seaweed? This is the question posed by the following case.

In November 2016, Mrs. X bought the house of Y, which is located in the town of Robert, forty meters from the Atlantic coast, not directly by the sea, but behind a first row of houses and a road. In April 2018, she requested the cancellation of the sale and the restitution of the price (230,000 euros).

She affirms that she would never have bought this house if she had known that it was regularly affected by the fumes of toxic gases caused by the decomposition of brown algae on the coast. Indeed, she explains, air quality was a “determining factor” in her purchase, as she has a child with asthma.

She assures that the sellers, questioned by her on several occasions about the presence of Sargassum, lied to her – which is confirmed by a witness -, by assuring that their house was spared. It shows a television report, filmed in June 2015, in which Mr. Y, at the head of a collective, protests against the nuisances that gases cause in his neighborhood (throat and headaches, taps affected by corrosion , household appliances that break down, etc.).

She assures that the Ys took advantage of a lull to repaint the rooms and change the taps, in order to make people believe that their house was healthy. Ys respond that they cannot have intentionally concealed well-known information. They further dispute that they knew that Ms. X’s son had asthma.

Sellers win at first instance and on appeal. The Fort-de-France court considers that Ms. X should have known about the situation, since she has lived in the town of Robert since 2013. The Fort-de-France Court of Appeal admittedly admitted, on November 24, 2020, that the Ys “answered falsely” to the buyer’s questions, with “a will to deceive”. But she refuses to cancel the sale for “dol”. What the Court of Cassation, seized by Mrs. X, reproached her with, on June 15 (2022, 21-13.286) by specifying that, given the “repeated” nature of her questioning, they knew that their lie was about a “defining element” for her.

The court also censures the refusal of the Martinican jurisdiction to cancel the sale for “hidden defect”, as claimed in a secondary capacity by Me Taniev Labéjof, Mrs. X’s lawyer. He assured that the pollution was a hidden defect, since it made the house “unsuitable for its use” (dwelling). The Court of Appeal replied that “a phenomenon external” to the thing sold cannot constitute a latent defect.

The Court of Cassation has however already ruled the opposite, regarding the noise of the boilers of a building, audible in an apartment (03-12.497). Gathered this time in a formation of eleven magistrates, instead of the usual three, it reiterates forcefully that the Civil Code (article 1641) does not provide for the exclusion introduced by the Court of Appeal.

It does not follow the opinion of the Advocate General, according to which “the decomposition of sargassum algae on a coastal strip of the foreshore which is not directly adjacent to the land purchased by Mrs X cannot be considered as a defect or an inherent defect in the property sold”. She sends the parties back to this one, differently composed: the sale should finally be canceled.

After the murder of Shinzo Abe, the Japanese Prime Minister denounces a “barbaric act”

Sri Lanka’s president on the run, his official residence invaded by...

After Elon Musk’s announcement of his refusal to buy Twitter, the...