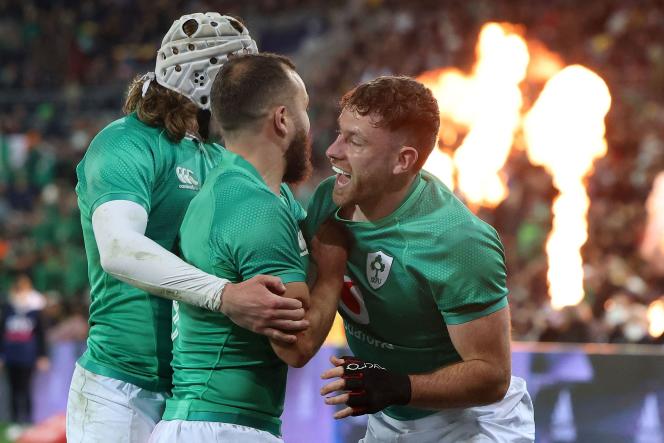 The Irish national rugby team signed in Wellington on Saturday July 16, a second victory in a row against the All Blacks in New Zealand (32-22), thus winning for the first time their summer tour on new soil. -zeelandish.

The All Blacks had not lost two games in a row at home against a European team since the victory of France during their tour in 1994. A major snub for the coach, Ian Foster, more threatened than ever. With this success, acquired thanks to four tries, against three for New Zealand, Ireland will resume the world number 1 chair on Monday.

The first period was totally Irish, the All Blacks seeming lost, disoriented in the face of this domination. Quite the opposite of the second, which saw the awakening of New Zealanders, authors of three essays in sixteen minutes. But the teammates of Jonathan Sexton, again imperial (12 points) at just 37 years old, did not tremble, resisting until the last moment to snatch a precious victory.

“It’s a very special day, because we’re playing against the best in the world. To come here and [win] is very, very special,” Captain Sexton told the BBC. As was the case in the first two test matches, Andy Farrell’s men hit hard from the start of the match.

Following an error by the New Zealand captain, Sam Cane, much criticized since the start of this tour, the XV of Clover obtained a penalty in the 4th minute. The Irish then choose the key rather than attempt the three points, aiming just since, on a magnificent ball carried, the third row Josh van der Flier flattens in force for the first try of the meeting.

Sexton then fails to transform (5-0), but the domination of Ireland continues, repelling the assaults of the team at the silver fern. It was not until the 23rd minute that Jordie Barrett, facing the poles, reduced the score (5-3). The Irish then follow up with a magnificent three-quarter movement, which shifts their back Hugo Keenan for the second try of the Greens, at the forefront.

Sexton, this time, transformed without problem (12-3, 28th), passing the symbolic bar of 1,000 points in selection. He then worsened the score (15-3, 32nd), despite the whistles from the Wellington stadium, disappointed with the performance of his team which made a lot of effort but multiplied the clumsiness, too often losing the ball.

On the Irish side, it’s the opposite: the rugby of the Clover XV is so fluid that the team is logically rewarded, with a third try, again superb, following a scrum and signed by center Robbie Henshaw, on an offering from his teammate Bundee Aki (22-3, 37th).

Back from the locker room, Ian Foster’s men revolted immediately, launching a ball-in-head attack against the Irish defence, using patience to chain around twenty phases of play, to finally flatten by third line Ardie Savea (22 -10, 44th).

The All Blacks “machine” then starts to shake. Taking advantage of a numerical inferiority of Ireland, deprived of Andrew Porter, released because of a yellow card, Akira Ioane, tenured at the last minute in place of Scott Barrett, injured in a leg, rushes into the defense Irish to flatten while power.

A transformation of Jordie Barrett later, and New Zealand is only 5 points (22-17) from their opponent, enough to believe it again. A few minutes later, on a nice pass from Savea, Will Jordan pierces, fixes Sexton and accelerates to sign a try from more than 60 meters (25-22, 60th).

Ireland, however, did not let themselves be dismantled and, on a beautiful ball carried, scored their fourth try by hooker Rob Herring, who had just entered the lawn (32-22, 65th). The end of the meeting is marked by the composure of the Irish, united and solid until the end.