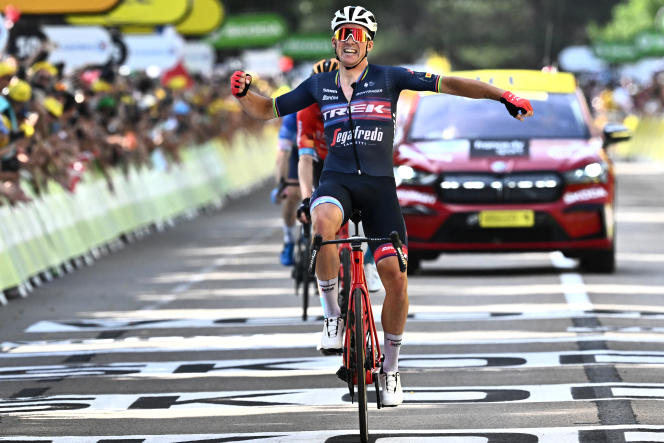 Mads Pedersen is like everyone else, he adapts somehow to global warming. The Dane of Trek-Segafredo belongs to that strange caste of runners who are never as happy as a rainy morning, no doubt because they know that 90% of their comrades have only one desire: to get back under the duvet and to call in sick.

In Saint-Etienne (Loire), the specialist in the classics – these often cold and wet one-day races in spring – raised his arms in a 13th stage cut out for backpackers and with a mercury constantly above 30 degrees since the departure from Bourg-d’Oisans (Isère) and for 192.6 kilometers.

Amazing? Are we talking about Mads Pedersen, winner of a 2019 edition of the world championship in Yorkshire who had almost nothing to envy to the biblical deluge? His teammate, the prankster Latvian Toms Skujins, has also attempted “a rain dance” to bring some freshness and favor his friend.

Useless. Yes, the sun can shine for Pedersen too. In the shade behind the coach of the American team with very Italian coaching, Luca Guercilena tells Le Monde how his protege has evolved to not only be this cyclist in bad weather. “Mads has worked hard to adapt to the heat. He knew he was in a lot of pain in these conditions and he lost weight, explains the Italian manager. He knew he had to be a little lighter, that it wouldn’t be a problem for the classics and that would help him on days like today. »

“Sharp as a hunting dog”

The weight. In a sport where half a kilo taken can cause a crisis meeting with summons of the culprit, Mads Pedersen has often paraded his winter love handles and his good children’s cheeks at the start of the season. But when the Dane avoids taking extra pastries for breakfast, he rides with the lightness of a ballerina his 70 kg (for 1.79 m) on his bike.

His new line did not escape Vincent Lavenu, with the canine metaphor. “Pedersen is a little round during the season, but there he is sharp as a hunting dog”, observes the manager of AG2R-Citroën. His counterpart from Groupama-FDJ, Marc Madiot, knows the potential of today’s winner: “This guy has a bit of class, he’s a very handsome rider. »

The Mayenne is not resentful. 13 kilometers from the finish, the future winner put a fatal start to his runner, the Swiss Stefan Küng, as well as to the Italian Filippo Ganna (Ineos-Grenadiers). The two riders had spared no effort (with the help of the American from Movistar, Matteo Jorgenson) to create the breakaway of the day and impose a long showdown on the sprinter teams. “We fought a lot at the start, and as luck would have it, we were all three dropped at the end,” lamented Stefan Küng after dozing on a bottle of water.

Mads Pedersen then took Briton Fred Wright (Bahrain-Victorious) and Hugo Houle (Israel-Premier Tech) on his luggage rack. Six time zones from Forez, Quebec began to hope for the first victory of one of its own on the Tour, but the Canadian did not have the burst of speed to compete with his two opponents.

Neither did Fred Wright. “I would have had to be able to accelerate even more to beat Mads [Pedersen], but I was not capable of it, recognizes his runner-up of the day. When he attacked in the breakaway, he surprised me. I thought it would come more from Jorgenson or Küng. He was just stronger than me. »

Happy Danes. The subjects of Queen Margrethe II have already accumulated three stage victories since the start in Copenhagen, with previously the successes of Magnus-Cort Nielsen in Megève and Jonas Vingegaard at the top of the Granon. “For Denmark, three wins in four days is unbelievable. I’m happy for Mads [Pedersen], who deserves it,” commented the yellow jersey.

Unlike his compatriot, the Jumbo-Visma cyclist appreciates the heat, but even he is beginning to dread this heat wave which risks accompanying the peloton for a few more days. “You have to constantly cool down, bring your body temperature down, hydrate… We were hoping for a cool day, it was a hot and finally difficult day. Mads Pedersen found her quite enjoyable.