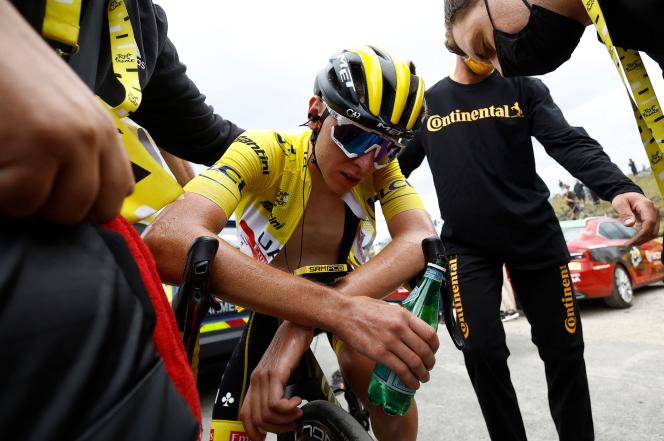 At the foot of the Granon, Tadej Pogacar offers his most beautiful camera smile. At a time when the race must get carried away and the Tour de France, perhaps, be played out. Doesn’t the cheeky respect anything? The Jumbo-Visma putsch a few kilometers earlier in the Col du Galibier? Not even hurt. The heat, the Alps, the altitude, the pincer strategy of the Dutch formation… everything then slips on the double defending champion.

It’s a bit quick to forget the essence of cycling. This sport of long time, where everything can sometimes get carried away in a few seconds. The certainties of the morning end in the ravine, the invincible god falls from his Olympus and our hearts of simple pagans race like Wednesday, July 13, during this 11th stage of the Grande Boucle.

Save the date. This is the day when the Slovenian lost, at the age of 23, his aura of invincibility on the slopes of this Granon (Hautes-Alpes), a torture chamber more popular since 1986 with its rough bitumen, its rare vegetation, but above all its 11.3 kilometers of climb at 9.2%. At the twilight of his career, Bernard Hinault had spent his last hours there in yellow, undressed by Greg LeMond.

The – provisional – winner of the outgoing double winner is just as blond as the American in 1986. Tadej Pogacar’s runner-up in 2021, Jonas Vingegaard not only won the stage and stole the yellow jersey from “Pogi”. The Dane did it with style and a nice margin. In the general classification, he is 2 minutes 16 ahead of a Romain Bardet (DSM) who one wonders if he has discovered a source of second youth in his Auvergne garden in Brioude. Tadej Pogacar (3rd) follows 6 seconds behind the French, after giving up almost three minutes to the winner.

“I didn’t feel well all of a sudden”

Crazy and above all unimaginable this Wednesday morning from Albertville (Savoie). The rocker does not always warn. When Vingegaard fired a shotgun 4.5 kilometers from the top of the Granon, the noise exploded the eardrums, but resonated especially in the legs of the leader. Planted, the yellow jersey wide open on his hairless chest, “Pogi” leaves his Sherpa at UAE, Rafal Majka, to carry the burden for him and close the gap.

But when the Pole steps aside, the Slovenian finds himself alone in the face of his current weakness. “I didn’t feel well all of a sudden, in the Granon. When Jonas attacked, I couldn’t answer, “he admitted a few minutes later at the microphone of France 2.

In his defense, the young man had so far not had many opportunities to analyze his shortcomings. In the last issue of Vélo Mag, published before the Tour, he nevertheless warned that they would come one day: “One day, I have no doubt, I will have a shitty year or nightmarish days, it’s part of cycling. »

As explanations for his bankruptcy of the day, he lip serviced to a possible “hypoglycemia”. A handsome loser, he also highlights Jonas Vingegaard’s number and recognizes the effectiveness of the Jumbo-Visma strategy, taken a little too quickly for a Dutch branch of the Spanish team Movistar in terms of baroque racing strategy.

A plan established “several months ago”

To hear the new yellow jersey, this 11th stage had been on the minds of his teammates and sports directors for “several months”. “We had a plan at the start, we wanted to make the race very hard, we thought it would play for me and for Primoz [Roglic]”, continues the interested party.

FFP2 mask on his mouth, the other Slovenian hinted at the smile of the satisfied teammate. “Everything went even better than planned. We delivered an incredible team performance,” said Primoz Roglic. To thwart King Pogacar, he agreed to be the sacrificed pawn, he who lost his feathers and his status as house leader with his northern roll of the 5th stage.

Jonas Vingegaard had only words of love to thank him. “Primoz was great. He was the leader at the start and he did everything in his power to help me. He showed how generous he was. »

The triple winner of the Vuelta thus shook the coconut tree for the first time on the climb to the Col du Télégraphe, nearly 70 kilometers from the finish, then put the cover back in the Col du Galibier. The idea was simple, to listen to Sepp Kuss. “We knew Primoz wanted to attack, but we didn’t know how Pogacar and the others were going to react,” observes the American from Jumbo-Visma. If it doesn’t work once, you have to try again, huh. Once, or several. »

If Jonas Vingegaard and his friends had not decided to launch their 18-Brumaire from so far, Warren Barguil (Arkéa-Samsic) presented a good head of winner. In the Galibier, “Wawa” – his nickname – pressed the pedal, with immediate effects, to isolate himself in the breakaway group, which included Wout van Aert and Christophe Laporte.

The latter quickly put his friend Mikaël Cherel up to speed. “From the start, we saw the Jumbo-Visma, which wanted to slip into the holes, with Van Aert in particular, says the AG2R Citroën rider. I slipped a note to Christophe [Laporte] and he made me understand the team’s strategy. There, I understood that it was good to be in the breakaway, but that she had little chance of going to the end. »

Our Anglo-Saxon colleagues have an expression for this kind of stages: “vintage stages”. Or old-fashioned cycling, with attacks if possible within 800 meters of the summit. Warren Barguil would have preferred a more conventional scheme and another main course than the Col du Granon. “The valley before finished me. At the foot, I completely stumbled and I knew it was going to be complicated, “concedes the combative of the day, almost on foot when being overtaken by Jonas Vingegaard.

The first French stage victory will wait a bit. A tricolor success in Alpe d’Huez, on a July 14 day, that would look good. White jersey of the best youngster on the back, Tadej Pogacar promised fireworks, without specifying the date. “I’ll try to get some time back on Jonas. I think it will be fun for you to follow this duel. »

The Dane is already buying the screenplay. “Tadej is a huge runner, probably the best,” he admits. Taking the yellow jersey from him was unthinkable and I know he will do everything to get it back. “Wasn’t it Tadej Pogacar who repeated to all the microphones – before crossing this cowrie of Col du Granon – that “the Tour was not over”?