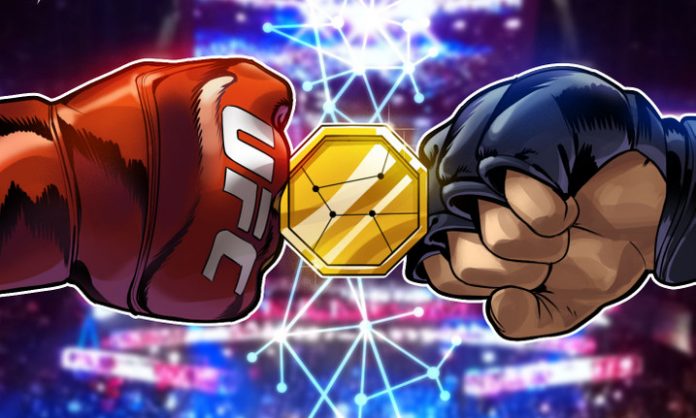 Although the terms of the deal were not made public, sources claim that it is worth $175million over 10 years.

UFC announced Wednesday it had entered into a partnership with Crypto.com for a fight-kit, CNBC reported. Crypto.com is the largest cryptocurrency trading platform by trading volumes.

CNBC reports that the sponsorship will last for more than 10 years and is worth $175million.

The agreement will see Crypto.com’s logo on both the fight kit items worn during competition by athletes and the clothing worn by training staff. Crypto.com also acquired rights to UFC’s new sponsorship category, “Cryptocurrency platform partner.”

Kris Marszalek, co-founder of Crypto.com and CEO, called the UFC deal “historic” and noted that it would “accelerate world’s shift to cryptocurrency.”

Ari Emanuel is the CEO of Endeavor Talent Agency, which bought a stake in UFC back in April. He said that this agreement was “just the beginning” of a long relationship.

Recently, the UFC began exploring the potential benefits of cryptocurrency and entered into partnerships with several blockchain-related startups. The UFC plans to launch a UFC fan token with the help of blockchain rewards platform Socios.com, and tokenization platform Chiliz. The UFC previously partnered with Stake.com, a crypto-enabled online casino to create exclusive digital UFC content.

This partnership is another milestone in the convergence of crypto and sports. The National Basketball Association’s Portland Trail Blazers secured its first team jersey patch agreementt with the blockchain reward app StormX. The StormX logo will be featured on Trail Blazers jerseys starting with the 2021-22 season.