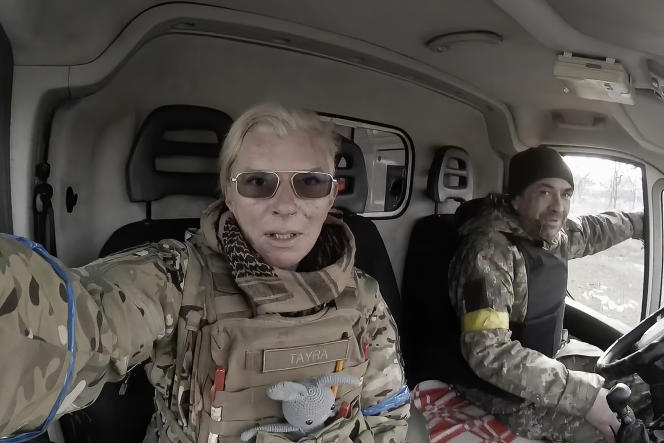 Ukrainians are familiar with the name of Yuliia Paievska, a rescue worker better known by the nickname “Taira”, the one she gave herself in the video game World of Warcraft. They discovered her in 2013 when, as an aikido teacher, she joined the volunteer rescuers to treat the wounded during the Euromaidan demonstrations, then the Donbass at war, where she formed the group “Taira’s Angel”, whose members evacuate wounded soldiers from the front.

This civilian, who served as a medical personnel in the army in 2018 before being demobilized in 2020, is said to have saved the lives of more than five hundred Ukrainian soldiers since 2014. Aged 53, she is the only female member of the Ukrainian Invictus Games team for military veterans. It was in this context that she had received, in 2021, a small mobile camera to participate in a Netflix documentary series on inspiring characters, produced by Prince Harry, who founded the Invictus Games.

She made a completely different use of it. Taira had been based in Mariupol since 2019 when war broke out on February 24. She stayed there. His camera was used to film 256 gigabytes of images bearing witness to the daily horror of the first two weeks of siege in the port city of the Sea of ​​Azov.

“We treat everyone the same”

This intimate and striking video testimony is now accessible because it was given to the American press agency Associated Press (AP), the last international media to have left Mariupol, in March, which retraced its content in a report published Thursday, May 19. His camera filmed up close the interventions of medical teams with civilians, including children, some of whom did not survive, despite the strenuous efforts of the Taira team. “I hate it,” she is heard saying in a video where, sobbing after trying in vain to revive a little boy who was hit in a firefight, she closes his eyes.

His team also takes care of soldiers, both Ukrainian and Russian. In a sequence filmed shortly after the start of the war, she asks her colleagues to cover a wounded Russian soldier who is shivering with cold. “You take care of me,” the fighter told him. “We treat everyone the same,” she replies.

On March 15, a police officer handed a memory card containing all the videos to AP journalists just before they left Mariupol. Yuliia Paievska asked them to take the map and the first-hand testimony it contains out of town. The next day, the doctor disappeared with her driver, Serhiy.

Both were kidnapped by the Russians, along with hundreds of other Ukrainians. A video broadcast on a Russian newscast on March 21 announced his capture, accusing him of trying to flee the city in disguise. Taira appears there, looking haggard, reading a statement calling for an end to the fighting. Behind her, a voiceover taunts her colleagues, calling them “Nazis.”

The volunteer carer has not been seen since. Her husband, Vadim Puzanov, said he has heard little from his wife since her disappearance. In early April, Ukrainian Deputy Prime Minister Iryna Vereshchuk announced that Yuliia Paievska’s name had been placed on a list of prisoners that Ukraine wanted to exchange with Russia. The Kremlin, however, denies holding the rescuer, whom Moscow presented in March as part of the Azov regiment, which Russia has made the symbol of the “Nazification” of Ukraine. The AP agency found no evidence to support this claim.

Vadim Puzanov told AP of his outrage at the way his wife is portrayed by Russia, and of his constant concern about the treatment that could be given to his wife. In a video shot on March 10 in Mariupol, Taira replied to a woman who asked her if she was going to “treat the Russians” that she could “not do otherwise” because they were “prisoners of war”. “They won’t be so nice to us,” she also blurted out.