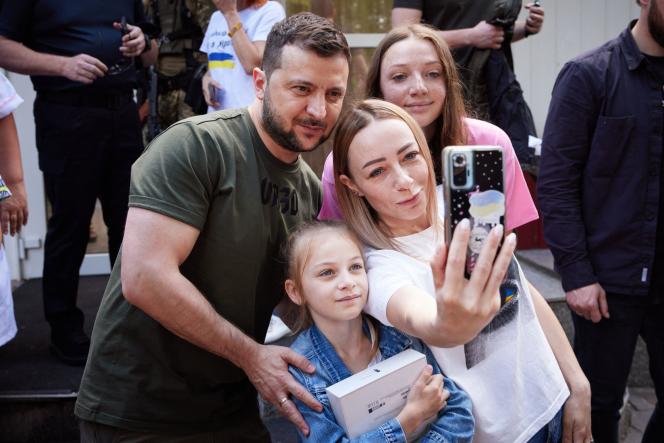 Selfies, hugs, and even a few smiles. Volodymyr Zelensky’s visit to Zaporijia, to the refugee families of Mariupol, was the high point of a trip to several areas of Donbass. His troops are still holding out in many tense areas across the east of the country, as the 102nd day of war saw kyiv targeted by Russian missiles for the first time since late April. This threat, phantom again until then, was accompanied by severe warnings from Vladimir Putin.

“Half the city is under the control of our defenders,” Ukrainian governor of Luhansk region Serhi Haidai said in an interview broadcast on social media on Sunday. This key city in the east of its territory is the epicenter of fierce fighting in the vast Donbass coalfield. kyiv says it expects a major counterattack. At the beginning of the week, the Ukrainian army evoked 80% of the city in the hands of the Russian army. Over the past few hours, each side has claimed to be making progress in Sievierodonetsk. Its capture would be a major asset for the Russians who want to control all of Donbass, part of which pro-Russian separatists backed by Moscow have held since 2014.

The Ukrainian capital, which was resuming a semblance of normal life, was hit at dawn on Sunday by several Russian strikes, the first since the end of April. “I heard about six explosions at 5:57 a.m.,” 72-year-old Natalia, who was awakened by the shelling, told Agence France-Presse. One injured person was hospitalized, Kyiv Mayor Vitali Klitschko announced on Telegram. She quickly left the hospital during the day. Russian President Vladimir Putin has threatened to strike new targets if the West supplies long-range missiles to Ukraine.

The airstrikes targeted a freight car repair workshop in the southeast of kyiv, 10 km from the city center, according to Russia, which claims to have destroyed armored vehicles supplied to Ukraine by countries of Eastern Europe. “High-precision, long-range missiles fired […] at the outskirts of kyiv destroyed T-72 tanks supplied by Eastern European countries and other armored vehicles that were in hangars,” said Russian Defense Ministry spokesman Igor Konashenkov. This was denied by Ukrainian officials and witnesses on the spot.

The Ukrainian president visited his troops on the front line in Donbass, in the east of the country where the war is raging against Russian forces, on Sunday June 5, he announced in a video posted on social networks. “We were in Lysychansk, we were in Soledar,” said the leader who went to command posts in those localities near Sievierodonetsk. He also traveled to Bakhmout, in the southwest of the Donetsk region, and spoke with soldiers, the presidency said.

Another stage, the city of Zaporijia. There he met residents of Mariupol who managed to flee this strategic port on the Sea of ​​Azov almost completely destroyed by Russian bombing. “Each family has its own story. Most were without men,” he noted. Between the photos and the encouragement, Volodymyr Zelensky could only note those who are missing, those who are absent, missing: “The husband of one went to war, that of the other is in captivity, that of yet another, unfortunately, died. A tragedy. No home, no love. But we have to live for the children. True heroes, they are among us. »

Sunday evening, on another ground, the national team lost 1-0 in Cardiff against Wales, thus failing to qualify for the World Cup in Qatar. Galvanized by a flag signed by soldiers from the front hanging on the wall of their locker room, the blue and yellow have all the ingredients to win this match: desire, combat, technique, tactics. All but one: efficiency. “I think we did everything we could,” coach Oleksandr Petrakov admitted at a press conference. A great architect of Welsh success, Wayne Hennessey hailed “a fantastic team from Ukraine”. Several thousand Ukrainian supporters filled the Cardiff stadium.

Results of the 2022 legislative elections: Manuel Valls eliminated in the...

Boris Johnson, weakened by the “partygate”, subject to a vote of...

DRC: President Tshisekedi has ‘no doubt’ about Rwanda’s support for M23...