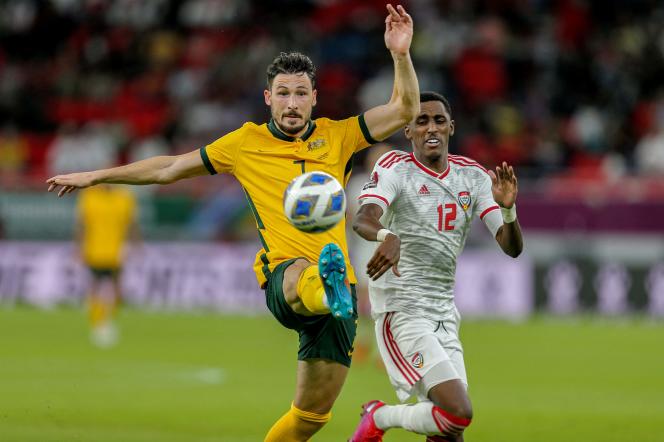 It is becoming clearer for the Blues of Didier Deschamps. The France team knows that it will face Denmark and Tunisia in the first round during the FIFA World Cup in Qatar next November and December. The third and final opponent will be known on June 13 after the match between Australia and Peru.

Australia will play for everything after having won in difficulty, Tuesday, June 7, against the United Arab Emirates 2-1, in the pre-lockout match of the Asia zone, disputed in Qatar. The winner of the Asia-South America intercontinental play-off will inherit the coveted spot in Group D from the French world champions.

To win “we’ll have to play a better game”, announces Australia coach Graham Arnold, “50% satisfied” with Tuesday night’s victory. “If I walked into the locker room to ask the players if they have room for improvement, I think they would all say ‘yes,'” he said in a post-match press conference. That’s what we need. »

The Peruvian selection, 22nd in the FIFA rankings and fifth in qualifying for the South American zone, is aiming for a sixth qualification for the World Cup, the “Socceroos”, 42nd nation and third in their qualifying group, a fifth. The Emiratis are deprived of a second World Cup, after 1990.

Authors of a first period without relief, it was the Australians who opened the scoring in the 53rd minute by their midfielder Jackson Irvine at the near post. But the advantage didn’t last long: four minutes later, centre-forward Caio Canedo Correa equalized with a cross from the ubiquitous striker Harib Abdalla Almaazmi (19), author of the only two shots on target in the first 45 minutes .

Two more places to take out of thirty-two

In the 84th, the word of the end came back to midfielder Ajdin Hrustic, with a left shot from the edge of the penalty area deflected by an opponent, to the chagrin of the few thousand Emirati supporters who came as neighbors in the Ahmad bin Ali stadium. Their team “lack of energy” in the last fifteen minutes, could only see the Argentinian coach Rodolfo Arruabarrena, in place only since February and who manages for the first time at international level.

After Wales qualified on Sunday, there are only two tickets left out of 32 to win for the first World Cup in history in an Arab country from November 21 to December 18.

The day after Australia-Peru, Costa Rica and New Zealand will decide on June 14 for a place in the Group E record, with Spain, Germany and Japan.

Both matches are scheduled in the same Ahmad ben Ali stadium. The air-conditioned enclosure, located in Al-Rayyan (west of Doha), will host seven matches, including a round of 16, during the World Cup.

“By deciding to cut imports by ship of Russian oil, the...