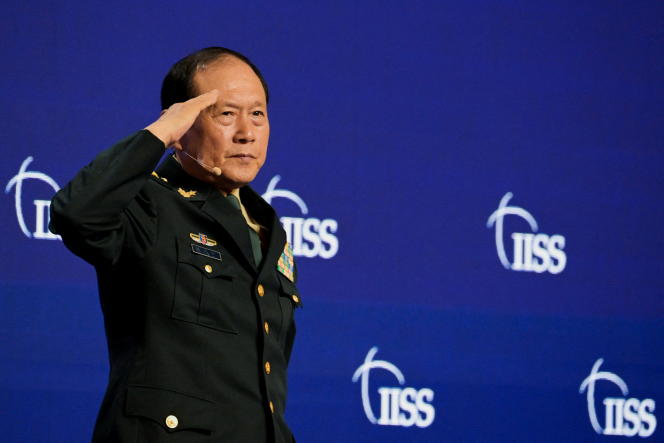 The media pass continues. Chinese Defense Minister Wei Fenghe said on Sunday (June 12) that it was up to the United States to improve bilateral relations between Beijing and Washington, which had reached a critical point.

Speaking at the Shangri-La Dialogue, an international conference on Asia-Pacific defense and security held in Singapore, Wei repeatedly said that China only seeks peace and stability, and was not an aggressor. He called on the US to “strengthen solidarity and oppose confrontation and division”, wishing for a “stable” China-US relationship, which he said is “vital for world peace”.

“We call on the US side to stop denigrating and containing China. Stop interfering in China’s internal affairs. Bilateral relations cannot improve if the United States does not do this. »

The Chinese minister said that China firmly rejects “the accusations and even the threats [made by] the United States” during the speech given in Singapore on Saturday by US Secretary of Defense Lloyd Austin. The latter had denounced Beijing’s “provocative and destabilizing” military activity near Taiwan.

The thorny case of Taiwan

But Austin also stressed the importance of keeping “fully open lines of communication with China’s defense officials” to avoid miscalculations. The pair had their first one-on-one talk on the sidelines of the Singapore summit on Friday, where they clashed over Taiwan.

China considers the democratic and self-governing island of 24 million to be one of its historical provinces, even if it does not control it, and has increased pressure against Taipei in recent years, for example through campaigns incursions into the Taiwan Air Defense Zone. These actions have increased tensions with the United States, which are already high on many other levels.

“We will fight at all costs and we will fight until the end” to prevent Taiwan from declaring its independence, Mr. Wei insisted on Sunday. “It’s the only choice for China,” he added.

“Those who pursue Taiwan independence with the aim of dividing China will certainly not achieve their ends,” he said, adding that “no one should ever underestimate the resolve and capability of the forces.” Chinese armies to safeguard its territorial integrity”.

China’s defense minister accused Washington of trying to “hijack” support from countries in the Asia-Pacific region and turn them against Beijing, saying Washington seeks to advance its own interests “under the guise of multilateralism.”

The China Sea, another subject of tension

This dispute is only the latest between Washington and Beijing. The South China Sea is another major hotspot in the region. China claims almost all of this resource-rich sea, through which billions of dollars in maritime trade pass each year.

Mr. Wei also said that China, North Korea’s main ally, wants peace on the Korean Peninsula after a recent series of weapons tests. “The key to [solving] the problem now is to pay attention to and accommodate the security interests of all parties,” he said.

Speaking at the summit on Sunday, South Korean Defense Minister Lee Jong-sup said Seoul would strengthen its defense capabilities and work with the United States against the threat from the North.

On the topic of nuclear armament, Wei, when asked about reports of more than 100 new missile silos being built in eastern China, said Beijing has “always pursued a proper path to develop nuclear capabilities for the protection of [the] country”.

“China has been developing its capabilities for more than five decades. It’s fair to say that there has been impressive progress,” he said. “China’s policy is consistent. We will use [these weapons] for our own defense. We will not be the first to use nuclear [weapons],” he added.

Last year, the US State Department called China’s nuclear development worrisome, saying it appeared Beijing was moving away from decades of nuclear strategy based on minimal deterrence.