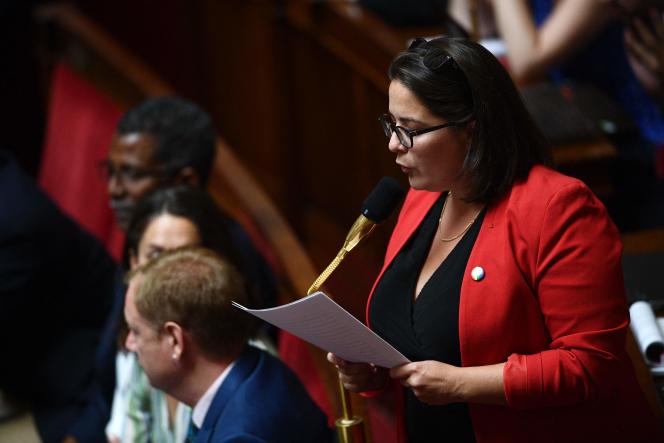 Words that do not pass. Two deputies from the ranks of Nupes, Ségolène Amiot (La France insoumise, LFI) and Marie-Charlotte Garin (Europe Ecologie-Les Verts, EELV) arrested on Tuesday July 19, during questions to the government in the Hemicycle, Elisabeth Borne on the presence of ministers who “chain homophobic and sexist statements” in his government. Ms. Amiot even called for them to be removed from government, telling the Prime Minister: “I’m waiting for you to fire your homophobic ministers. »

The two elected officials were referring to remarks made, in 2013 and last week, by the new Minister of Territorial Communities, Caroline Cayeux, on the marriage of people of the same sex, whom they described as “homophobic”.

“I am one of those people”

Ségolène Amiot first challenged the Prime Minister – absent from the Hemicycle but represented by the rest of the government – saying: “Madame Prime Minister, I am one of those people. A reference to the expression “I have many friends among these people”, formulated by Ms. Cayeux last week on LCP, to qualify same-sex couples and denounce the “bad trial” in homophobia which was addressed.

During this interview, the minister had also affirmed to “obviously maintain” her remarks made in 2013 during debates on marriage for all, while she was a senator, calling the reform a “whim”, and which, according to her, would lead to “a disrespectful and senseless overture to nature”. She finally apologized at the end of last week, under pressure from public opinion and several ministers.

“In two years, LGBTphobic attacks have increased by 20%” and “the ground of homophobia is too often refused by the police”, too little trained on the subject, argued Ms. Amiot. “But how can you blame them when the government is far from exemplary? How can you blame them when several others are stringing together homophobic and sexist statements? “, she continued, citing as an example the Minister of Ecological Transition, Christophe Béchu, that of the Interior, Gérald Darmanin, “and of course [the Minister of Territorial Communities Caroline] Cayeux who always affirms her contempt for homosexuals”.

In 2013, at the time of discussions on the law for marriage for all, Christophe Béchu had written a column in the conservative weekly Valeurs Actuelles against the reform, when Mr. Darmanin had declared that he would not marry same-sex couples. in its town hall of Tourcoing. In 2016, Mr. Béchu also banned HIV prevention posters “located near schools” in his city of Angers.

“You are targeting ministers, you are particularly targeting a minister, she apologized and today she is fully at work alongside Elisabeth Borne”, replied Isabelle Rome, Minister Delegate for Equality. between women and men and diversity, under boos from the left.

“When it comes to the fight against LGBTphobia, we have nothing to be ashamed of,” she said, before arguing: “Who opened PMA to all women, who banned conversion therapy , which has made blood donation evolve (…), it is the parliamentary majority! Ms. Rome also announced that she would bring together “at the start of the school year” the monitoring committee for the government’s “LGBT plan”, launched by her predecessor Elisabeth Moreno.

Regarding the words of Caroline Cayeux, “it’s not a clumsiness, it’s a crime”, however rebounded the ecologist deputy Marie-Charlotte Garin, a few moments after her colleague from the benches, also qualifying “the words of Mrs. Cayeux for what they are: homophobic remarks”. Also returning to the past remarks of other ministers, she thus challenged the Prime Minister, launching: “Ms. Borne, how can you appoint in your government” these people “? »

It was Olivier Véran, government spokesperson, who responded this time. The ex-socialist argued the battle of the left in 2013 for the law on marriage for all to be adopted in Parliament, facing “other parliamentarians who may have had words that could hurt”, “sometimes virulent “.

If “some words can hurt, can offend”, “we must refrain from speaking them, and even more, we must refrain from thinking them”, admitted the minister. But on the benches of the Assembly and in particular “of the government” and “of the deputies of the majority”, “we have one thing in common: the fierce desire to develop our society so that it reflects all its diversity, all its wealth,” Mr. Véran pleaded. “There are no ‘those people’, there are women and men who ask nothing more than to be respected and let live,” he concluded.