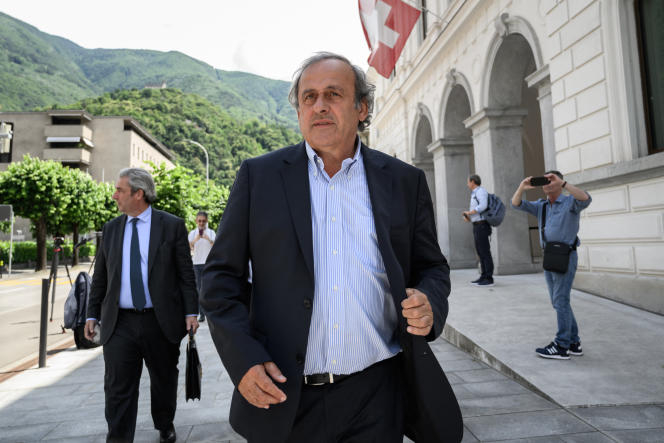 The life of Michel Platini took a disconcerting trajectory, like the free kicks brushed by the football player, the ball curving against the laws of physics to come to rest in the skylight of the goal. By one of these improbable effects, the legend of the France team of the 1980s, the number ten who had largely contributed to remaking France a nation that counts in its sport, finds himself today before Swiss justice for ” suspicion of fraud”.

The criminal court before which he appeared until June 22 was to examine the legality of a payment by the International Football Federation (FIFA), at the request of its then president, Sepp Blatter, of the sum of two million Swiss francs, officially for work whose veracity is disputed by the prosecutor. Verdict expected on July 8.

In “Le Monde”, Michel Platini thus suffered a false rebound from the sports section to that of justice. With a certain irony, it was already a question of money when his name appeared for the first time in this newspaper, on December 5, 1975. Gérard Albouy reported on a meeting of the French Olympic team, qualifying for the Games of Montreal, against communist Romania. It was largely about brown amateurism, the illusion of sport for the sole beauty of sport that the Olympic movement still maintained against all evidence.

20 years old, and “the insurance of the old veteran”

The French coach had been drawn from the pool of professional training centers to form the backbone of “a team brimming with energy and ambition like Michel Platini who was playing his sixth match in eighteen days and his thirty -sixth since the start of this season”. Proof that the infernal pace of football business does not date from today.

The player was still 20 years old, four months later, when he joined the real France team on March 27, 1976. Gérard Albouy seems to have been on the pitch, at least in the locker room, when he described in the March 30 edition the Nancy player’s first goal in the blue jersey: world. ” No sooner said than done. With the assurance and trickery of an old veteran, Michel Platini, who had received the ball from Henri Michel on an indirect free kick awarded in the penalty area, skillfully sent it into the Czechoslovakian goal, over seven defenders assembled in a derisory wall. “Forty other goals will follow in seventy-two selections in the national team, the most beautiful or the most decisive of which will capsize the French public with happiness.

World Cup after World Cup, Le Monde follows the course of the blues in Argentina (1978), Spain (1982) and Mexico (1986). For this generation of players – and supporters – it is the time of dreams of glory but also of cruel disillusions. The most iniquitous occurred on July 8, 1982 in Seville, in the semi-finals of the World Cup, against the Federal Republic of Germany. An elimination during the penalty shootout, at the end of a match with breathtaking drama.

From the stands, Pierre Georges describes the distress of the players after this failure. “There are shocking images. Little Giresse running like a thief towards the locker room to hide his pain there. Janvion, brave Janvion, limping and shaking his head gently like a groggy boxer. Platini walking like an automaton. And Trésor, his face buried in a German jersey. At that time, they really hurt the French players. We thought of them not as those heroes who died for the fatherland, not to pity them or celebrate them with tremolos in the pen, but as “stolen” young people, sportsmen unjustly missed out on immense joy, of unparalleled happiness. »

The triumph of the blues, during the European football championship disputed in France in June 1984, is barely enough to soothe this pain. Masterful throughout the competition, Michel Platini scored the winning goal against Spain, from a free kick as often. On June 29, Gérard Albouy described in detail this face-to-face between the French shooter and the Spanish goalkeeper, Luis Miguel Arconada. “Caught on the wrong foot, Arconada dived with a delay and saw the ball slip under his stomach. Platini offers the French football team its first major trophy.

The following year, his victorious goal with Juventus Turin against FC Liverpool, in the final of the European Cup of Champions Clubs, on May 29, in Brussels, will be reduced to the rank of anecdote. A crowd movement in the Heysel stadium has just killed 39 Italian supporters. The game is still played, against all logic. “The show had taken over. What rights? Football, this beautiful game, on Wednesday evening, had none left, ”wrote Christian Colombani bitterly, on May 31.

The player bowed out on May 17, 1987. In a column called “Slava” and “Platoche”, Bruno Frappat compared him to nothing less than cellist Mstislav Rostropovitch. “He slipped away to cheers, with a final weary bow, before heading down a small tunnel, the artists’ exit. “Followed a half-hearted career as a coach. Then another in the instances of football.

Too rushed, too greedy, flat out?

Here again Le Monde followed his rise when he became co-chairman of the organizing committee for the 1998 World Cup, then president of the European Football Union. The ambition to run for the presidency of FIFA, facing his former mentor Sepp Blatter, causes his loss. Too rushed, too greedy, flat out? On June 5, 2014, Stéphane Mandard reported suspicions of collusion of the former player with Qatar, during the awarding of the organization of the World Cup. Then Rémi Dupré will follow in a series of articles the adventures of this disputed payment of two million Swiss francs and the low blows within FIFA.

This is certainly not the first case of big money concerning Michel Platini. Along with talent, success, and popularity, came a corollary in his biography: money. Throughout his career, Le Monde has never failed to follow the financial adventures surrounding each of the player’s transfers, from Nancy to Saint-Etienne and then from Saint-Etienne to Juventus Turin. For the first time, in 1990, Michel Platini even found himself at the bar of a court, as a witness, in a slush fund trial in Saint-Etienne.

Robert Belleret follows the debates. On May 17, he wrote: “And Platini in turn enters the surface of judicial redress. Cascade of figures and false pirouettes. “What was I thinking when I received an envelope of 280,000 francs? I was happy. “If I put them in the bank? Well no, in a trunk.” The president plays for time for this relaxed star interview, but when the big kid tells him for the third time that he is “nice”, he still shows a yellow card: “Any Platini you are, please please, everyone keeps their place.” “Thirty-two years later, the former player finds himself before a judge, as accused this time, in a final counter-stance.