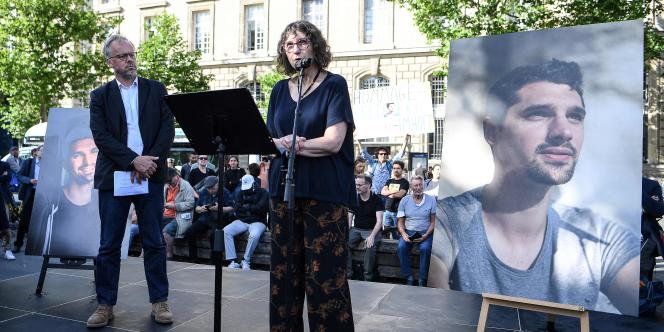 “There you are, Mr. Poutine, the beautiful person you killed,” said Friday evening, June 10, Sylviane Imhoff, the mother of BFM-TV journalist Frédéric Leclerc-Imhoff, killed by shrapnel on May 30 in eastern Ukraine, during a rally in Place de la République, in Paris, to pay tribute to him.

His family, his companion, Sam Cottet, his colleagues from BFM-TV, including reporter Maxime Brandstaetter, who teamed up with him in Ukraine, were notably present, alongside Marc-Olivier Fogiel, general manager of BFM-TV, and by Christophe Deloire, Secretary General of Reporters Without Borders (RSF).

Frederic was a “sweet and joyful person, so don’t be sad,” his mother said, in front of several hundred people attending the rally at RSF’s call, during which she recalled her son’s journey. “Giving a voice to the most humble, to the invisible” was part of “the values ​​from which he was steeped”, she underlined, moved, referring to previous reports with chambermaids in large hotels in particular.

Sam Cottet, the journalist’s companion, for his part recalled how much his job was a “vocation for him, despite his precarious status”. We shared a “deep and radical activism that was often joyful, sometimes difficult, even unsustainable,” he said, describing an almost year-long relationship with a “real life partner full of patience and drive.”

“His kindness” and “his sense of listening”

“The editorial staff is in mourning. We mourn a committed journalist”, underlined for his part Marc-Olivier Fogiel, describing a professional anything but “hothead”. “He wanted to tell the world, we will continue to cover this conflict,” he added. Late Wednesday morning, his colleagues at BFM-TV observed a minute of silence in his memory. The rally was marked by chants – Ma France by Jean Ferrat taken up by the crowd – and a long minute of applause.

The body of Frédéric Leclerc-Imhoff was repatriated to France overnight from Wednesday to Thursday, welcomed by members of his family, relatives and the Minister of Culture, Rima Abdul Malak. In front of his coffin draped in black, a moment of contemplation took place on the tarmac of Le Bourget airport, where his body arrived around “a little over 3 a.m.” in the morning, said journalists from his channel. news continuously.

Aged 32, Frédéric Leclerc-Imhoff had worked for BFM-TV for six years and was on his second assignment in Ukraine, as an image reporter. Graduated in 2014, he had been trained in journalism at the Institute of Journalism Bordeaux Aquitaine (IJBA), after studying philosophy in Paris. In a tribute on its site, the IJBA highlights “his kindness” and “his sense of listening”. Even if he was “discreet”, he “defended with fervor and a lot of humor” his “commitments as a man and a citizen”.

After the announcement of his death, the French National Anti-Terrorist Prosecutor’s Office announced the opening of a war crimes investigation. Foreign Minister Catherine Colonna tweeted that the journalist had been “killed by a Russian bombardment on a humanitarian operation while exercising his duty to inform”.