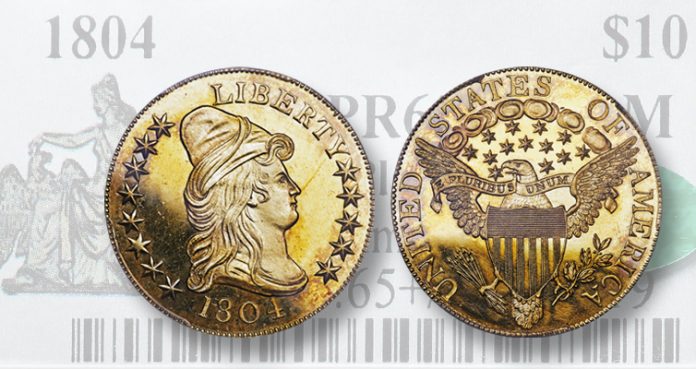 It was the capstone of a strong auction where two other coins crossed the $2 million barrier, among the sale’s five coins that exceeded $1 million. The 275-lot auction realized $21,866,215, adding to the more than $23 million realized in Heritage’s Part I and Part II offerings from the collection of the Texas businessman and co-owner of the Texas Rangers baseball team.

The magnificent 1804 Capped Bust, Plain 4 gold eagle rarity is listed as BD-2 in the Bass-Dannreuther gold reference and Judd 33 in the pattern reference, and it is the finest of only three known. The issue shares a lot in common with the better-known Class I 1804 Draped Bust silver dollars in that they were struck circa 1834 for inclusion in diplomatic presentation Proof sets.

This eagle was part of the Sultan of Muscat set presented to Sayyid Sa’id-bin-Sultan. The offering in Dallas marked only its third auction appearance.

First-runner up (in price realized) at the auction belonged to a famed Judd 1 1792 Silver Center cent pattern graded Specimen 67 brown by Professional Coin Grading Service with a green CAC sticker that realized $2,520,000. It is the finest of a dozen known to collectors today from an unknown mintage. The silver plug in the center of the copper planchet allowed the Mint to strike a coin with a cent’s worth of metal at a smaller and more manageable size than typical large cents. The price of copper dropped in 1793, rendering the innovation of unusual patterns unnecessary, and they reflect the ingenuity of the early Philadelphia Mint.

It was reportedly purchased by Simpson for $5 million in 2012, according to Heritage.

The auction firm observes, “The light reddish-brown surfaces are enhanced by highlights of electric-blue, lilac, and rose patina, with a few traces of original red in sheltered areas.”

An 1885 Trade dollar graded PCGS Proof 63+ Cameo is the only example of the just five struck to have a green CAC sticker. It is characterized by its wonderful eye appeal, where, according to the auction description, “Traditional lavender and lilac toning surrounds the peripheries, ceding to sunset-gold that warms the interiors,” with some striking softness as seen on the issue.

It’s currently ranked as the third-finest example in the condition census. More recently, the second-finest example, graded Proof 64 by PCGS sold for $1,320,000 in Stack’s Bowers Galleries’ March 2020 auction of selections from the E. Horatio Morgan Collection, making the $2,100,000 that the Simpson example brought seem like a very strong price by comparison.

The only known 1943-D Lincoln cent struck on a bronze planchet instead of the zinc-plated steel planchets used for 1943 cents sold for $840,000. Graded Mint State 64 brown by PCGS, Heritage’s lot entry records that it was purchased by Simpson from Legend Numismatics in September 2010 for $1.7 million.

Legend said at the time on the transaction, “The 1943-D bronze cent is the most valuable cent in the world and it took four years of aggressive negotiations with the coin’s owner until he agreed to sell it.”

The prized cent’s earliest history is a bit murky. It was discovered in 1979 when it was submitted to ANACS for certification and an oft-repeated story is that it was purposefully struck by John R. Sinnock — the Mint chief engraver well-known for his design of the Roosevelt dime — and was discovered in the estate of a woman Sinnock was dating in the 1940s.

John Wexler’s and Kevin Flynn’s Authoritative Reference on Lincoln Cents provides a more likely origin. They write “The 1943-D Bronze cent was owned by a former Denver Mint employee who is believed to have struck it. This coin has the strongest strike of any 1943 bronze cent. Speculation has it that the person hand fed a bronze planchet into the coining press, struck it twice to bring up the design, then kept it.”

Heritage put more stock in the Wexler-Flynn hypothesis, while adding, “We see no evidence that the coin was struck twice and suspect the sharpness of the strike was a function of the relative softness of the bronze planchet compared to the harder zinc-coated steel planchets used for the rest of the production run.”

Among other delicacies in the Simpson collection was an 1804 Capped Bust, Plain 4 $10 eagle pattern graded Proof 64 by PCGS that realized $288,000. The silver die trial is listed as Judd 34, one of just four examples known. It’s first mentioned in the 1913 Adams-Woodin pattern reference book and research continues to determine just when it was struck. It is the second-finest example known, bested by one on display at the Harry W. Bass Collection at the American Numismatic Association’s museum. Heritage concluded, “This coin combines the finest available technical quality, outstanding eye appeal, and intense historic interest in one irresistible package.” The same could be said for many of the Simpson Collection offerings.