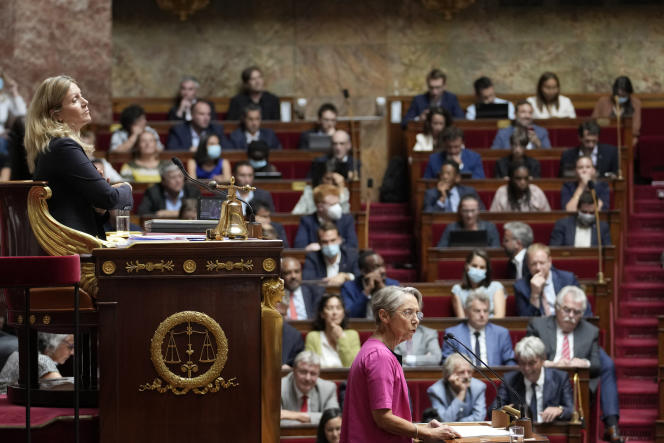 A hemicycle inflated to block, a few boos and invectives, for a speech focused on the “compromise”: it was the atmosphere of the big days Wednesday, July 6 at the National Assembly, for the declaration of general policy of Elisabeth Borne.

In line with the intervention of the Prime Minister, the leader of the Renaissance deputies, Aurore Bergé, claimed, in particular thanks to “a culture of compromise”, “fewer laws, better written, better negotiated, better evaluated” .

Laurent Marcangeli, president of the majority member group Horizons, spoke of a “major turning point in our way of legislating” after the legislative elections. “No, France has not become ungovernable” after the ballot which caused the presidential camp to lose the absolute majority in the Hemicycle, thinks Mr. Marcangeli, and insists: “We will make this new configuration a strength. »

Boris Vallaud, the president of the socialist group, told him of a “worrying” moment. “The French no longer trust you and they no longer trust the President of the Republic whose program they do not want,” he said. We will not join you in setting up a program with liberal projects that are not ours and for which the voters did not designate us. »

The president of the deputies of the National Rally (RN), Marine Le Pen, considered that the situation of the government was “out of control” and the maintenance of Elisabeth Borne in her post a “political provocation”. “The president acts as if nothing had happened” after the legislative elections, yet “it’s the return of politics that jumps out at him, it’s a great political moment”, launched the finalist of the presidential election from the rostrum of the National Assembly.

Mathilde Panot, president of the La France insoumise group, criticized the Prime Minister for her “save-it-can strategy” in the absence of a vote of confidence, and the “compromises” of the majority with the RN. “A vote of confidence was in order. But you chose flight (…). Your strategy now is “save who can”. And you are ready for anything. Never compromise but all compromises “, launched the leader of the seventy-five “rebellious” deputies.

The president of the deputies Les Républicains (LR), Olivier Marleix, assured that his group would not engage in any “compromise” with the executive but would not cause “sterile blockage” in the National Assembly either. Responding to Elisabeth Borne’s keynote speech, Mr. Marleix said he did not want the politician’s “little soup”, while remaining open to support on certain texts.

The commitment of the executive judged “on documents”

The co-president of the Ecologist group, Cyrielle Chatelain, spoke for five minutes, in particular to denounce the climate emergency and deplore “the burial of the Citizen’s Climate Convention, a historic error”. “Do not be afraid of democracy, do not be afraid of this Assembly. Trust the French men and women who already bear the beginnings of another attention to the living, another attention to the world and to others, ”insisted the ecologist.

“Seize this opportunity to advance democracy,” said Julien Bayou. And the co-president of the group of ecologists to continue: “We owe you the presence on these benches of ninety far-right deputies”, “you who did not want to choose [in the second round of the legislative elections] between our candidates and the eternal adversaries of the Republic”. “It’s an extremely heavy fault,” he attacked.

The president of the group of deputies of the Democratic and Republican Left, André Chassaigne, says he sees, in the result of the legislative elections, the “rout” of the Head of State, which “is not an accident”, but rather the demonstration that “presidential hypertrophy has lived”. His majority in the Assembly having become very relative, Emmanuel Macron “has no mandate to impose his political agenda”, according to Mr. Chassaigne, who welcomes it: “The time is no longer for the exercise solitary of power (…), to the passage in force, to the humiliation of Parliament (…). Democracy finally finds colors. »

Bertrand Pancher, the president of the Liberties, Independents, Overseas and Territories (LIOT) group, defended that “The Republic is not the Parisian Republic, it is the Republic of the territories”, and warned that he and his group will “judge” the executive’s commitment “on paper”.

Nicolas Dupont-Aignan, the deputy of Essonne, on behalf of the non-registered deputies, considered that the government had not “heard the message of the ballot boxes of June 19”. Yet it was an opportunity for them to have a “historic opportunity to listen, to hear, to propose a new course”.

Critics also emerged in the afternoon, after the Prime Minister’s speech. Raphaël Schellenberger, on the LR side, mocks a “roadmap of commonplaces”. Same story with Nupes: “We will do better. How ? By changing nothing but together,” quips socialist Olivier Faure. “Allegory of boredom”, for the “rebellious” François Ruffin.

“Besides what we are currently experiencing, [Jean] Castex was a fiery orator! Pity !! says about the form the “rebellious” Alexis Corbière, who observes a “storm of truisms”. Communist Fabien Roussel sees “a red line crossed” on pensions, when Ms. Borne tells the French that they will have to “work gradually a little longer”.

The elected Karl Olive (Renaissance) retorts that “it will have taken less than eight minutes for the artists of LFI to confuse the National Assembly with” Le Grand Cabaret “by Patrick Sébastien”. Other walkers are moved by a lack of “respect for institutions”.

Opposite the Palais-Bourbon, “rebellious” activists organized a small happening at midday on Wednesday with a fictitious wedding ceremony between Emmanuel Macron and Marine Le Pen, to denounce “the burial of the Republican front”.