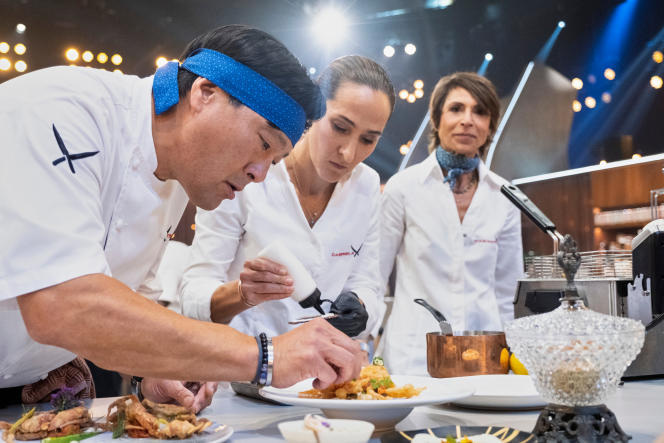 France is now accustomed to reality TV culinary competitions, whether in the pastry and bakery field (“Who will be the next great pastry chef?”, on France 2, “La Meilleur Boulangerie de France”, on M6) or in that of cooking with “Top Chef”, also on M6, or “Masterchef”, on TF1 from 2010 to 2015, which France 2 announces will relaunch at the start of the school year.

These last two programs are adaptations of Anglo-Saxon originals which have imported a sense of the spectacular into this setting. But that’s nothing compared to the dramaturgy of “Iron Chef”, a show of Japanese origin which, like “Strictly Come Dancing” (“Dancing with the Stars” on TF1) or “RuPaul’s Drag Race” (“Drag Race France”, on France.tv Slash and France 2), has had multiple versions abroad.

Starting with the United States where the original Japanese “Iron Chef”, created in 1993, broadcast by a few local stations, then, from 1999, by the cable channel Food Network, quickly became a cult show. The reasons for the public’s enthusiasm are multiple: a kitsch ceremonial; the appearance and clothing of its permanent presenter, the “President”, half Liberace, half Dracula; the huge budget for decor and ingredients; the vibrating realization and the permanent overheating of the protagonists.

The franchise’s latest avatar, which has seen many versions on the Food Network, is “Iron Chef: Quest for an Iron Legend”, offered by Netflix, with a significantly larger budget than that of Food Network and a dramaturgy and tests with imposed ingredients which do not move away from the original matrix.

Since 2005, the vociferous Japanese vampire has been preferred by the American actor of Hawaiian origin and kung-fu and karate champion Mark Dacascos. Dressed more soberly, he would be a kind of cross between Yul Brynner and a Ninja Turtle, responsible for opposing “challengers” to confirmed “Iron chefs”, including the French Dominique Crenn. Based in San Francisco, the Breton is the first woman to have been awarded three stars in the Michelin guide in the United States.

And we see that the one whose documentary series “Chef’s Table”, on Netflix, had portrayed is playing the game of “Iron Chef”: here she is dancing and doing “Tope there!” as she enters this gigantic “kung-food” arena, dare we say, surrounded by the public and where the jury stand, two presenters (including Kristen Kish, a name that would be difficult to bear in a French “Iron Chef”), in addition to “president”.

Purists, fans of the Japanese program, many excerpts of which can be found on YouTube (including a compilation of the best moments of the “President” when the wasabi went up in his nose) regretted that by declining ad nauseam, “Iron Chef” had lost its original flavor, made of extravagance and kitsch.

As for the French, they risk being put off by a hardcore cuisine that is no longer called “fusion” but “global” (more politically correct), where the backbone of a sturgeon is simmered with cocoa and Korean kimchi is accompanied by oysters… Fortunately, everything is saved by the “French touch” of Dominique Crenn.

News Editor - July 9, 2022 0
"You can't stop a dancing people!" After two years of pandemic, summer finally marks the return of concerts, festivals and free parties with the...