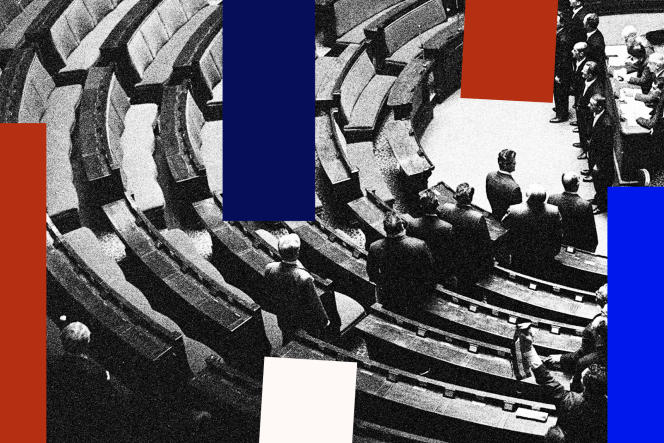 Will Emmanuel Macron retain the absolute majority in the National Assembly, which he obtained in 2017? After the first round, Sunday, June 12, the New Popular, Ecological and Social Union (Nupes) totaled, according to the final results, 26.11% of the vote, slightly more than the presidential coalition Together! (25.88%). The National Rally (RN) comes third (18.68%), LR-UDI-various right fourth (11.30%) and Reconquest! fifth (4.25%). A total of 572 constituencies out of 577 remain to be filled, with an absolute majority set at 289 seats.

As in the first round, at 8 p.m. sharp on Sunday June 19, the last polling stations in major cities will close their doors, lifting the ban on the dissemination of results. Estimates, number of deputies by party and official results…: when and how will the end of this election take place?

In order to be able to distribute the first figures to the French, the polling institutes make estimates based on the results of a defined number of polling stations that they consider representative of the vote as a whole. The geographical particularities (rural communes, small or large towns, etc.) and political (offices on the left or on the right, reversal or consolidation of the trends observed in the previous election, etc.) are taken into account to build a statistical model.

Like IFOP or Harris Interactive, Ipsos – which produces the Ipsos-Sopra Steria estimate for various media – uses this method. The institute sends its investigators to the 580 offices in the sample. Each of them attends the count and transmits:

These feedbacks are centralized and an estimate of the final result is then calculated. This is not a simple count: in the case of Ipsos, 70% of the offices in the sample close at 6 p.m., around 10% at 7 p.m. and nearly 20% at 8 p.m. Knowing that it takes about an hour to count all the ballots of a polling station (less if abstention is high), the institutes do not have, at 8 p.m., either the partial results of the polling stations that have just closed or even of all the complete results of those of 7 p.m.

To produce their figures, polling companies use algorithms that take into account feedback from polling stations the same evening, but also data from previous elections. Each time counts are added, the algorithms refine the estimates.

This system has a weakness since it relies on the voting dynamics observed in the offices which have already closed, to project them on those which close at 8 p.m. However, these are not always the same electorates.

For the first round, as we explained in a previous article, the projections were very fragile, in particular because they were based on polls carried out before even knowing the names of the qualified candidates.

On the evening of the second round, these projections will be much more reliable, without being exact to the nearest seat. To give an estimate of the number of seats that each political formation could obtain, the institutes take into account the results of the first round and the results counted in their samples of polling stations on the evening of the second round.

“Our sample allows us to see the evolution of votes between the first and the second round, the vote transfers, explains Jean-Daniel Lévy, deputy director of Harris Interactive. Thanks to a mathematical model, we project these changes to all the constituencies and this allows us to give an estimate of the number of seats for each political party. »

In 2017 as in 2012, the projections given by Ipsos-Sopra-Steria on the evening of the second round proved to be very close to the actual composition of the Hemicycle thereafter:

The Ministry of the Interior, in charge of organizing the elections, begins to broadcast the results by municipality from 8 p.m., then it updates its publications continuously. At the beginning of the evening, only the results of the smallest municipalities, quickly stripped, are available.

After the closing and counting of nearly 70,000 polling stations, the results are communicated to the prefectures, which in turn send them to the Ministry of the Interior. These results are then published as they become available. Even if the high rate of abstention usually observed during legislative elections makes the operation faster, the results of all the constituencies are generally not known until late at night.

The results are considered final once validated by the Constitutional Council, after examination of potential cases of irregularities.