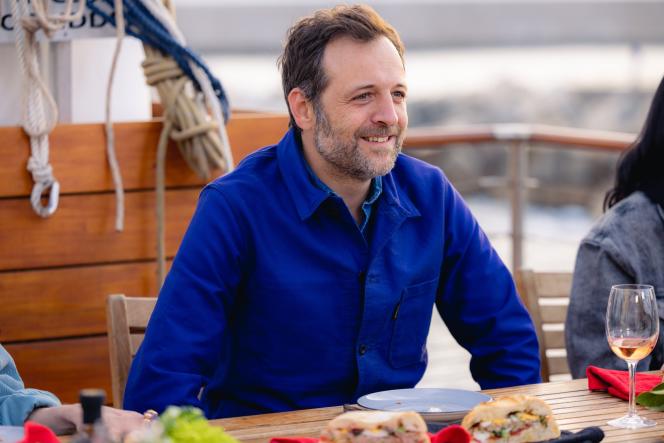 It’s the story of a man who runs – metaphorically at least, because he prefers to walk, whether in Paris, Corsica (where part of his family is from) or Italy, so dear to his heart. It is the story of a man who works a little, a lot – radio, TV, books –, but always with as much passion and the same high standards and, what does not spoil anything, with remarkable generosity and loyalty. .

It is therefore with great pleasure that after having sketched his portrait (and a few gavottes) we wanted to celebrate with François-Régis Gaudry the 10th anniversary of “Très Très Bon”, his weekly program on Paris Première which, at this occasion, had the good idea to shake up its grid to offer, this Sunday, a “Very very good day”, from 10:50 a.m. until 4:50 p.m.

So it all started ten years ago and a little bit. And on the hats of wheels since, food columnist at L’Express, François-Régis Gaudry is simultaneously, or almost, approached by France Inter – where he produces the program “We will taste” – and Paris Première. The idea was then to take up the concept of the program of its predecessor: a François Simon in hidden camera walking from table to table to give his opinion.

Initially, he recalls amused, François-Régis Gaudry shoots with his phone: “Imagine what cell phone cameras looked like ten years ago! “Except that, over the seasons, the capsule of a few minutes begins to expand, to become a real thirty-minute magazine, with columnists and columnists, where each and everyone has their role and their area of ​​​​expertise.

Alongside the wonderful Elvira Masson, his lifelong accomplice, champion of waste reduction, Jordan Moilim is responsible for finding the best “bouis-bouis” in the capital, Valentine Oudard is the show’s sweet tooth, Frédérick Ernestine Grasser Hermé is the “food thinker” when Antony Cointre, the latest arrival, comes to spice up the traditional market tour and Gwilherm de Cerval, brings his “solid knowledge of liquids”.

The program relocates regularly (Marseille, Lyon, Lille): enough to expand the “Very Very Good” community, especially since to the very good audiences for a cable channel, we must now add those it knows on the social networks. And then, even if “it’s pretentious to say it, apologizes François-Régis Gaudry, it’s a program that has a great impact in the community”.

In fact, just ask the chefs who open their restaurants: they all want to be part of it, because a good score in “Very Very Good” is worth immediate recognition. It even happens, sometimes, that a dish chronicled in the program becomes the emblem of the house. This is a bit like what happened for the elegant Café des Ministries, in the 7th arrondissement of Paris, where, after a hymn to vol-au-vent, the restaurant was stormed, and the dish definitely settled on the map.

Your free and open

Recognition, therefore, and, without the festive spirit ever suffering, serious too, in a landscape where everyone tends to improvise gastronomic criticism, between more or less informed amateurs and sometimes unscrupulous influencers of ethics. Yet François-Régis Gaudry is, from this point of view, exemplary. Honest, he was able to find a resolutely free tone, and resolutely open to the cuisines of the world, their history (we remember the couscous special of “Très Très Bon”), leaving the floor to everyone, and to all types of cooks the possibility of flourishing: such as street food, which now occupies a real place in Paris.

But anyway, what has changed in the kitchen in the last ten years? “A lot of things, and I was incredibly lucky to arrive in this context!, says the taster host. Ten years ago, we were in full bistronomy: basically, good dishes in nice settings. Then came, pell-mell, a more than credible Italian cuisine, an excellent Jamaican cuisine, a formidable offer in terms of street food, whether oriental, Asian, American. Without forgetting the sweet chapter: “We have seen the appearance of a real seasonal pastry, sourced in a very responsible way – which was not the case only a few years ago, where you could find a tart à la raspberry in December! In general, it is a sustainable gastronomy that we see emerging, and I was lucky enough to be able to accompany this exciting moment. »

And it is a bit of this story that this special 10th anniversary day also tells. It must be said that with François-Régis Gaudry, cooking is also “a wonderful reading grid, which allows us to talk about history and geography, economy and ecology”.

News Editor - July 2, 2022 0
With the so-called "edge" stages, it's kind of always the same story. The organizers propose, but the wind disposes. Since the presentation of the...