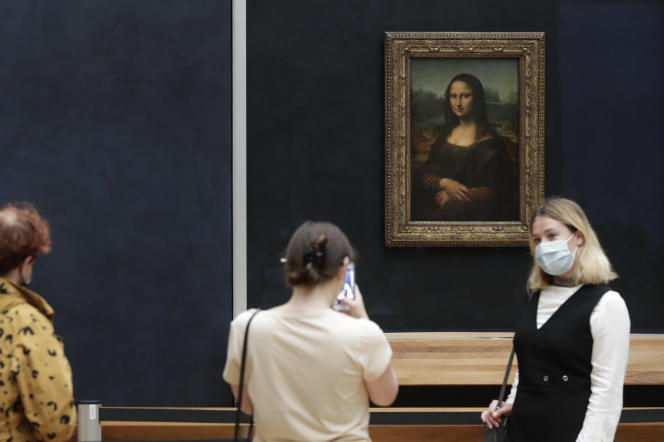 “Think of the Earth (…). There are people who are destroying the Earth, think about it. All artists, think of the Earth. That’s why I did this. Think about the planet. This is what claimed the man who, on Sunday May 29, threw a pastry on La Joconde, at the Louvre, in Paris.

No photos or video captured the incident itself, but the Museum explained on Monday how the incident unfolded:

“A visitor simulated a handicap situation to use a wheelchair and approach the work installed in a secure showcase. The Louvre has applied its usual procedures for people with reduced mobility, allowing them to admire this major work of the Louvre. Installed near the work, this individual threw on the window of the Mona Lisa, a pastry that he had hidden in his personal effects. This roll had no effect on the painting, which suffered no damage. The individual was immediately seized and evacuated by the reception and surveillance agents and then handed over to the police, who came to the scene. The Louvre Museum filed a complaint. »

In contrast, visitors present that day streamed videos of the seconds following the “scaling”. Those of “Lukeee”, an influencer – in the making, with 363 followers on Twitter – from Denver, Colorado, for example, went around the world, totaling more than 1.6 million views (cumulative).

The 36-year-old man who threw the cake was admitted to the psychiatric infirmary of the police headquarters and an investigation was opened for “attempted degradation of cultural property”, we learned , Monday, with the Paris prosecutor’s office. For her part, Mona Lisa waited, stoically, to be washed and resumed her activities: the contemplation of her audience.

At a rate of 30,000 visitors a day, this type of incident was bound to happen, again at the most famous painting in the world. This scaling is, in fact, not his first misadventure: in 1911, the Mona Lisa was stolen by Vincenzo Peruggia, an Italian glazier who participated in the work of putting under glass the most important works of the Museum, in order to protect them from vandals. . He kept it for two years in his room, before offering it to a Florentine antique dealer. She returned to the Louvre in 1914.

She went through the two world wars without incident – ​​the first in Bordeaux then Toulouse, the second in Chambord, Amboise, Loc-Dieu, Montauban, Chambord, Montal en Quercy, in the Lot and the Causses. Then new measures are taken, after, on December 30, 1956, Ugo Ungaza Villegas, a Bolivian subject to a deportation order, throws a stone at the painting and breaks the ice that protected the portrait of Lisa Gherardini . Shards of glass damaged his left elbow.

In 1974, during Mona Lisa’s visit to Japan, a woman threw red paint on her. Then in August 2009, a Russian visitor was arrested after throwing a teacup at the painting. The projectile does not resist the armored window which is only very slightly scratched.

Because, since 2005, the Mona Lisa has passed quiet days behind armored glass, protected by a special box where humidity and temperature are controlled. Protection all the more necessary as the canvas is not insured. In 1962, before La Joconde’s trip to Washington and then New York, Le Monde wrote: “The painting is practically priceless, the premium would have been exorbitant anyway and, in the event of theft, the fact that it was not insured eliminates any possibility of blackmail with the companies”. In 2020, Beaux-Arts magazine explained that, “unlike private museums, the state does not pay for insurance. The cause ? Too many works, and of too high a value. No one could afford to insure priceless paintings. (…) All that remains is to invest in security. »