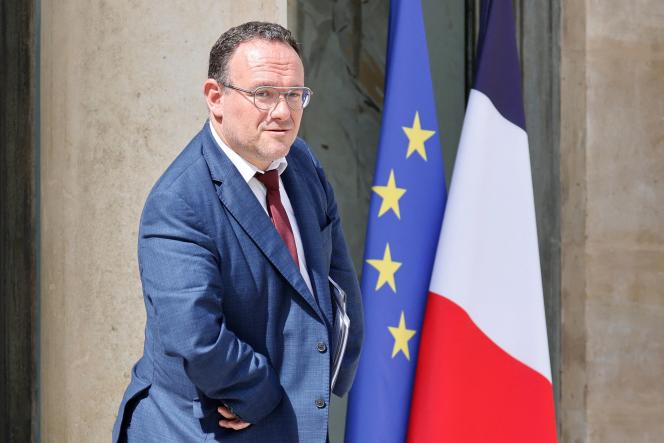 The Minister of Solidarity, Damien Abad, already implicated for sexual violence, is targeted by new accusations from a woman who says she suffered an attempted rape in 2010, according to her story published Tuesday, June 14 by Mediapart.

Mr. Abad, who is seeking a new mandate as a deputy on Sunday in Ain, denounced the “carefully chosen calendar of these publications” and the “partiality” of the Mediapart investigation, which he said has a “political” motivation. “As for the reported allegations, they revolt me ​​and I categorically refute them,” Mr. Abad added.

“Laëtitia” (assumed name), a “centrist elected official”, accuses Mr. Abad of having tried to rape her during a party organized at his home in Paris in the first half of 2010. Without explicitly mentioning a complaint, his lawyer, Me Raphaële Bialkiewicz, told Mediapart that she was “collecting and cross-checking elements, with a view to providing all the necessary follow-ups”. “Today, I can no longer be silent,” Laëtitia told Mediapart. “If I speak, it’s so that it stops, so that he can’t start again,” she added.

“I was scared, I was flabbergasted”

During the events she relates, she was president of the New Center youth movement, of which Mr. Abad, MEP, was the national president. On the evening of the events, she says, Damien Abad “offered her a glass” at the bottom of which she saw “something”: suspicious, she went to spit her sip into the toilet.

“Laëtitia” says she was finally able to “get rid of” her alleged attacker and leave the room thanks to the irruption of a guest. The facts reported by this woman are “supported by the testimonies of eight people, in whom she confided or who may have witnessed certain elements of her story”, and whom Mediapart claims to have contacted.

These accusations come after those published by the online media on May 21, the day after Mr. Abad’s appointment as Minister for Solidarity, Autonomy and Disabled People: two women, quoted by Mediapart, accused the new minister of raping them in 2010 and 2011.

According to the Paris prosecutor’s office, one of them – who confirmed her story to AFP – filed a complaint twice, but these two complaints were dismissed in 2012, then in 2017, first for “deficiency of the complainant”, then “in the absence of a sufficiently serious offense”.

As for the other accuser, the prosecutor’s office announced on May 25 that it was not opening a preliminary investigation “as it stands” into the facts she denounces, for lack of any element allowing her to be identified. His testimony was indeed transmitted to justice in an anonymized form by the Observatory of sexist and sexual violence in politics.

“Is Damien Abad worthy to exercise his functions and to work for the general interest? “, wondered Tuesday this association after the new revelations of Mediapart, adding that” a lack of reaction could, in the state, be interpreted only as a validation by the government of this type of violent behavior towards women “.