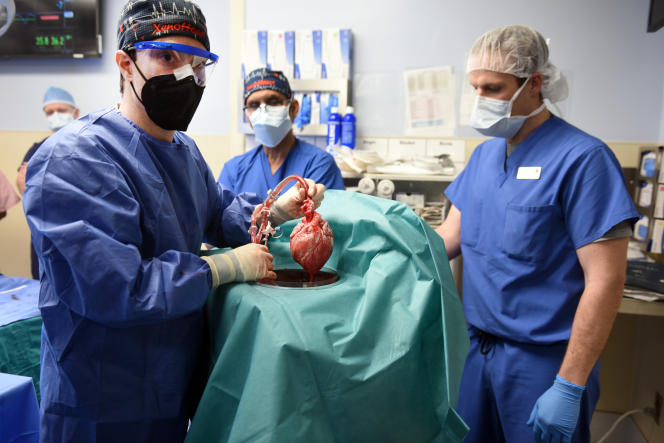 In December 2021, the United States Medicines Agency (FDA) urgently authorized a group of Baltimore scientists to embark on a risky and unprecedented undertaking: to transplant a genetically modified pig’s heart into a seriously ill 57-year-old patient, ineligible for a human gift, and doomed. died two months after the transplant performed on January 7; his surgeons have since worked to understand the causes of his death. The answer is complex, according to the first results of this still ongoing investigation, published Wednesday, June 22 in the New England Journal of Medicine.

The organ implanted in David Bennett came from an animal “manufactured” by the American company Revivicor, carrying ten genetic manipulations. Cloned, selected, separated from its mother and its congeners over two generations, this animal was supposed to be “clean”, that is to say without virus, nasal PCR test in support. But the precautions were insufficient. On the 20th day after the transplant, analyzes revealed the presence of DNA from a porcine cytomegalovirus (CMV) in blood samples taken from David Bennett, who was doing quite well. On the 50th day after the transplant, his condition is deteriorating rapidly despite the battery of treatments he is receiving, including antivirals. His heart is failing, circulation and oxygenation of the blood must be supplemented by an extracorporeal machine. He died on March 8.

No signs of rejection

Cardiac ultrasounds on days 19 and 49 revealed thickening of the lining of the ventricles of the heart, and analysis of cardiac tissue after biopsy showed deterioration after day 50, with approximately 40% necrosis of cardiac muscle cells. When he died, his heart had doubled in size. But no typical signs of a rejection were observed, according to the American team. The presence of the porcine virus in the patient’s heart and blood may have played a role in the heart failure. Further testing is ongoing as human herpes virus 6 was found in David Bennett’s lungs and may have reacted with CMV.

This virus problem should have been avoided. According to Nicolas Müller, specialist in immunology in human transplantation at the University of Zurich, the preventive tests carried out on the pig were not complete: “The search for viral DNA in a nasal sample by PCR in an animal in good health is not enough because he can be negative and still carry the virus. Serology should be done to look for antibodies against CMV in the blood, but these tests are not developed for pigs. »

Another element may have compromised the experience. American doctors reacted quickly, perhaps too quickly, after the virus was detected in the blood. To combat a potential viral infection, they gave David Bennett two doses of broad-spectrum human antibodies, some of which can recognize and neutralize porcine proteins. “This is precisely what we are trying to prevent in the case of a xenograft, in particular with genetic modifications so that the immune system does not turn against the animal graft, comments surgeon Léo Bühler, member and former president of the International Xenotransplantation Association. This could have been problematic and counterproductive for the maintenance of the heart. »

Eventually, death would have been caused by diastolic heart failure, the origin of which is still unexplained. The poor general state of health of the patient at his treatment, the presence of the porcine virus and the administration of very concentrated antibodies probably played a role.

This mixed success is, however, a decisive step for the xenotransplantation scientific community, which is also on an unprecedented path. “The heart was the first to reach the clinic in the United States, and it was a good idea because the preclinical results in baboons were good,” confirms Eckhard Wolf, xenotransplantation specialist at Ludwig University Maximilian from Munich, whose team was the first in December 2018 to keep alive monkeys transplanted with genetically modified pig hearts for almost six months. These German scientists had already warned in 2020 of the deleterious effects of porcine CMV which had caused the grafts to fail in two of their primates who died before the others.