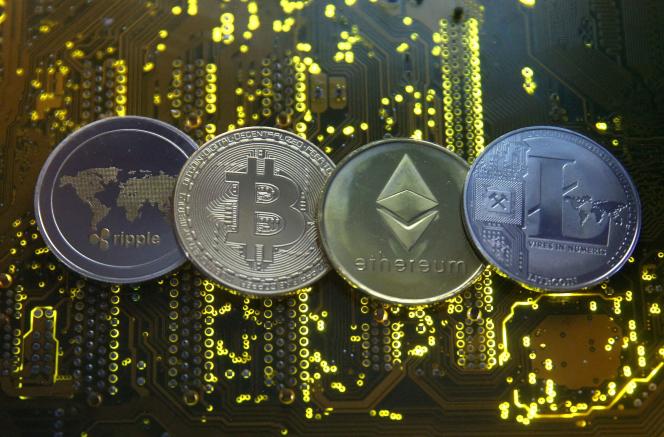 Considered by its supporters as a bulwark against inflation, bitcoin, which had reached its all-time high at more than 68,000 dollars (nearly 65,000 euros) in November 2021, saw its price drop by more than 15% on Monday 13 June, approaching the $20,000 mark. As investors worry about rising rates and the risk of recession in the United States, the entire cryptocurrency market has fallen below the symbolic cap of 1,000 billion dollars. However, it had exceeded 3,000 billion just seven months ago.

The storm in the financial markets is not sparing bitcoin, and is partly the result of the decisions of the major central banks, particularly in the United States, with the Federal Reserve (Fed) and, in the euro zone, with the European Central Bank. (ECB). The latter, by injecting liquidity into the financial system to support the economy affected by the Covid-19 pandemic and the confinements of recent months, have favored the creation of speculative bubbles and the partly artificial rise in prices, in particular of equities. technologies (Nasdaq). However, we are now witnessing the bursting of these bubbles as well as the fall of the markets, including that of cryptocurrencies.

In question, in particular, the change of monetary course. Central banks are tightening their policy and withdrawing their support for the economy to fight against inflation, which is particularly high in the United States. The ECB has announced that it will raise its key rates on July 21, while the Fed has already started to raise its rates. In this context of soaring prices and strong uncertainties related to the war in Ukraine, investors tend to fall back on assets considered safer, such as US government bonds. And they sell stocks deemed riskier, including those of tech companies, which drives down the price of the Nasdaq, as well as the value of bitcoin. “Investors tend to treat all risky assets the same. They then sell the whole package, including the cryptocurrencies,” says Eric Dor, director of economic studies at the IESEG School of Management.

In addition to inflation, the recent upheavals in the world of cryptocurrencies also contribute to the general mistrust of bitcoin. Take the example of the “stablecoins” crisis (cryptocurrencies aiming for a fixed price against the dollar), triggered by the collapse of the terra. On May 11, the price of terra, whose value is normally close to 1 dollar, fell to around 30 cents. Terra was trading earlier in the day at 43 cents, down 53.5% from its price the previous day.

The parity with the dollar was not ensured by currency reserves, but by an algorithm which makes arbitrages according to the supply and demand of another cryptocurrency, its “little sister” luna. But this digital token has itself tumbled under the impact of a wave of liquidations. On May 11, it sank nearly 95% to $1.69, leading to panic and a massive terra sell-off. The stablecoin collapsed, causing a wave of distrust and the fall in the price of many cryptocurrencies in its wake, including bitcoin.

That’s not all: On Monday, June 13, Celsius Network, a New Jersey-based cryptocurrency lending company, announced that it had suspended “all withdrawals and transfers between accounts” “due to extreme market conditions.” The platform offers investors to deposit their cryptocurrencies and in exchange pay them higher returns through loans or investments. It had attracted the interest of traditional finance, with, for example, an increase in its capital from the Caisse de dépôt et placement du Québec. But assets placed with Celsius have seen their value melt away, with the fund claiming to manage $12 billion in mid-May, half as much as the end of 2021.

The turmoil also hit US cryptocurrency platform Coinbase, which posted a net loss of $430 million in the first quarter. She announced on Tuesday, June 14, the dismissal of 18% of her workforce, her boss referring to economic conditions and “the too rapid expansion of the company”. This corresponds to approximately 1,100 positions, Coinbase specified in a stock exchange document. The company employed 1,250 people at the start of 2021, compared to more than 6,000 currently.