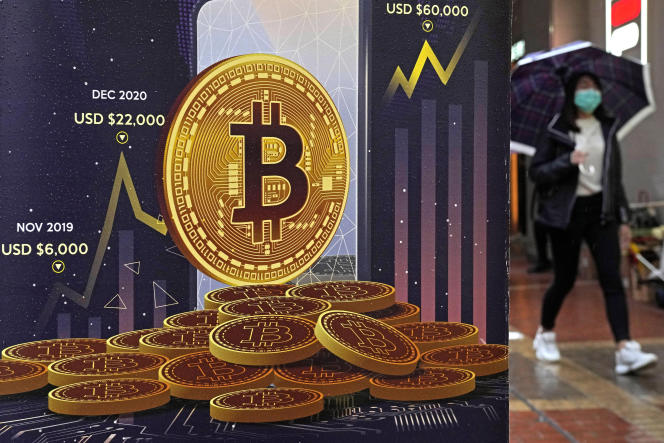 “I was disappointed, but that was to be expected. At the beginning of June, stunned by the collapse of cryptocurrency prices, Anthony (the people quoted whose names do not appear wished to remain anonymous), an electronics and computer science student, resolved to die in the soul, to sell those he held. “I lost half of my investment in the space of two days”, or 200 euros out of the 400 euros initially bet, laments the young man of 20 years. He is not the only one.

Bitcoin, whose price fell from 69,000 dollars (about 65,000 euros) in November 2021 to nearly 20,000 dollars in mid-June, continues its descent into hell, dragging with it the entire crypto-asset market, whose value fell below the $1 trillion mark. The platforms where these pseudo-currencies are exchanged have also plunged into turmoil: the American Coinbase announced on June 14 that it was cutting 18% of its workforce, Celsius, which managed valued assets at $12 billion in mid-May suspended withdrawals and transfers, while CoinFLEX said on June 24 it had suspended all fund withdrawals, citing “extreme market conditions.”

As a result, individuals who have placed their savings on these platforms are worried. Since the creation of bitcoin in 2008, and especially since 2016, the adoption of cryptocurrencies has grown exponentially, according to a study published in February by the consulting firm KPMG. First reserved for a circle of insiders, they then spread among institutional investors, then among the general public. Today, nearly one in twelve French people has one, and among them, young people are overrepresented: 46% of holders are under 35, while this age group represents only 25% of the population. “Technology, enthusiasm and accessibility promote adoption by young people”, analyzes Alexandre Stachtchenko, director of blockchain and cryptocurrencies at KPMG France.

Warning from the Financial Markets Authority

The market collapse shattered the illusions of those who believed in the promises of endless upside for these cryptoassets. While some were cautious, others lost a lot, like Anthony. He discovered cryptos while chatting with a friend: “It was reassuring to see that I was not alone in the delirium. By the time he started investing, in October 2021, he believed bitcoin was already too expensive – its price was then over $40,000.

So he turns to ether, the second most important cryptographic currency, as well as the shiba inu, created in August 2020. “I spent a budget of 30 to 50 euros per month on it”, he explains . The tumble in prices in recent weeks has dampened his hopes of gain, even if the volatility in this period of uncertainty does not surprise him: “From the moment the media predicts a fall, people start selling , so prices go down even more. »

Maxime does not intend to sell his cryptos anytime soon. As a marketing student, he decided at the age of 19 to place 100 euros in bitcoin and 100 euros in ether in early May. He then takes advantage of one of the many offers circulating on the Internet. A series of specialized sites offer, in fact, sponsorships: from ten to fifteen euros for a registration on Coinbase, or up to 40% commission to those who refer their friends to Binance.

But some platforms not regulated by the Autorité des marchés financiers (AMF) or malicious sites promise very high or risk-free returns, some of which are scams. “They contact their future victim by e-mail or telephone, after the latter has left their contact details on a site offering to invest in cryptocurrencies”, notes the AMF site, which has set up a list blacklisting of actors who have been the subject of a warning published by the Autorité des marchés financiers and/or usurping the identity of a regulated actor.

“Some form of panic”

Additionally, “many intermediaries target young and old, offering a variety of cryptoassets – including tokens that don’t hold much appeal – to gamble for a quick short-term profit, with a view to trading,” adds Jonathan Sportiche, Chief Marketing Officer of Paymium, a French platform. Celebrities such as American reality TV star Kim Kardashian and boxer Floyd Mayweather were also sued in the United States in January for advertising Ethereummax, a fuzzy cryptocurrency whose price collapsed.

Today, the value of Maxime’s investments has fallen by half since May. “If I sell now, I’m a loser. However, I think it will go up, he says. And I only put a small part of my savings there. “In a certain form of panic, many young people, and not so young people, are selling at a loss and are in a very delicate situation,” observes Jonathan Sportiche. According to KMPG, the sums invested remain, despite everything, reasonable for most holders: 76% of them say they devote less than 10% of their savings to it.

“I haven’t invested thousands and cents either,” confirms Romain, 22, a BTS nutrition student. A year ago, by spending 20 euros out of pocket in an online casino, he took advantage of a sponsorship offer of 100 euros and managed to quickly earn the equivalent of 500 euros. He then places his winnings in five other cryptocurrencies, but not in bitcoin: “To make bigger profits, others are more interesting. »

In euphoria, he continues to bet on even more speculative investments: non-fungible tokens (NFTs) and cryptoassets he calls “shitcoin”, a colloquial term used to describe a cryptographic currency that is not based on a solid project. “They don’t have a core value proposition,” according to Alexander Stachchenko. In December 2021, brutal return to reality: Romain has lost everything. “I got screwed,” he laments. But he is not discouraged: he has just replaced 300 euros in cryptos which he considers safer, betting on the long term.

“You can multiply your profit by five”

Alexandre, he assures that he was prepared for the plunge of the courses. “You can never know, but I could see that the situation was tense,” says the 23-year-old international management and marketing master’s student. When the traditional stock market declines, inevitably, cryptos decline even stronger. »

From the age of 18, he was first interested in the blockchain, this technology which makes it possible to list transactions in bitcoin or other in a decentralized ledger. It quickly becomes a passion. At 20, he buys cryptos for the equivalent of 1,500 euros, during confinement. He learns by watching videos on YouTube: “I trained myself,” he says. He diversifies his investments in five cryptocurrencies, which they consider more interesting than the traditional stock market: “the profit of 3% or 4% is already very good there, whereas in cryptos, you can multiply your profit by five – but it is more risky. »

Faced with the uncertainties linked to inflation and the war in Ukraine, he limited his investments by investing 400 euros during the fall in prices, and by moving part of his holdings to stablecoins, stable cryptocurrencies that replicate the value of the US dollar or euro. “I limited the damage,” he said.

Like the young people we met and many of those interested in cryptos, he is convinced that the value of these will eventually go up. Confidence in the blockchain and in the innovations on which bitcoin and its little brothers are based, likely to revolutionize the way finance works, remains, for them, intact. Alexandre doesn’t doubt it for a second: “I believe in technology and everything around it. »